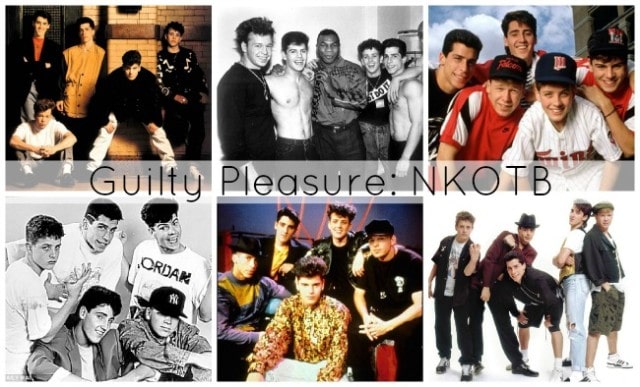 When I was a kid, I liked the same music my friends liked. Madonna, Prince, Michael Jackson, and near the end of elementary school… New Kids on the Block. I can remember my sister and I getting grounded for calling the NKOTB 976-number over and over to learn what was Joey’s favorite beverage, Jordan’s dream girl.

Then middle school came and primarily in thanks to my friend Annie, I was exposed to “real” music. INXS, The Smiths, Red Hot Chili Peppers, The Pixies, R.E.M., The Cure. While it wasn’t “cool” to like New Kids on the Block, they were still my guilty pleasure.

High school – I had half my head shaved and the rest of my hair dyed black. I drew all over my jeans, wore Doc Martens, and spent my weekends sulking around Georgetown and going to all-ages shows at the old 9:30 Club but I still had a small place in my heart for New Kids on the Block. Come college, it was more about Dave Matthews Band and Smashing Pumpkins yet I still thought on occasion about Jordan, Joey, Job, Danny, and Donnie and yes, come 1999 I wore the heck out of the cassette version of Jordan Knight’s solo album (I got cassette so I could play it in my old car because my sister/roommate would yell at me to stop playing it at home).

As I have mentioned before, I lost the music passion some time around the end of college, and My Morning Jacket brought back the love. Since 2006 or so, I have been learning more and more about new and old music, and I guess I have become a bit of a music snob. Bands and songs I adored a year ago now seem too simplistic, genres I before poo-poohed I now love and research. I also have gained much nostalgia for those first artists I loved – the ones I sang along to in my bedroom, the ones I danced to at homecoming, the ones that were the soundtrack to my adolescence.

So when I saw NKOTB’s new video was out for their song, “Remix (I Like The)” I was excited. I wanted to see how they were going to handle coming back, considering these “boys” are now men, with women, not girls as their primary fan base. Would they make me a giggling preteen in my bedroom surrounded by issues of Tiger Beat, or would they make me feel old and disappointed?

Neither. NKOTB managed to make me feel like a cool 38-year old woman who has good taste in music but a soft spot for the boys from Boston… and that it’s pretty cool to have that soft spot. Catchy song that isn’t too saccharine, well-made video that will appeal to many ages of females but especially mine, and the smart choice to focus on Donnie Wahlberg who has aged very very nicely.


Thank you NKOTB for ending this week on a high note. I like the remix!