The biggest reason I hesitated doing Weight Watchers again was worrying about numbers. What would be my weight? What would the scale say each week? The last time I did Weight Watchers I had a scale in my bathroom and caught myself weighing myself sometimes three times a day – I would be so excited when I saw a loss, and so frustrated when I saw a gain. I got so into the number on that scale, I missed the bigger picture. Yes, I want to lose weight – I want a smaller number on that scale. But I want to live a long and comfortable life. I want to have energy, I want to feel comfortable in my skin, I want to remove stress from my heart and other organs. I want to avoid the health issues that my relatives have and had.

However I knew I had to lose weight, and I knew Weight Watchers was a lifestyle choice, not an actual diet. I knew I could start it and continue it for life without feeling as though I couldn’t socialize, enjoy what I like, go on vacation, eat birthday cake (or drink a birthday cocktail!). I also knew that though I hate scales, I knew I had exceeded THE NUMBER. 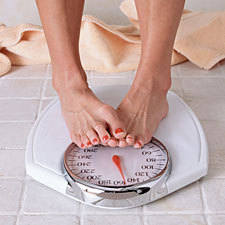 I think we all have THE NUMBER – a weight you promise you will never and can never exceed. For me, that number was 200. I had exceeded 200 once before in my life, and I practically starved myself to return to the land of the 1-somethings. Even if I was 199, well I wasn’t THAT NUMBER. And then I got pregnant. I exceeded 200 pounds around 32 weeks and when I saw that number I almost threw up. It took a lot of reassuring by my midwives, my husband, my self to justify that number – I was creating a PERSON in my body, I will probably lose at least 15 pounds within my first week postpartum, yadda yadda. But it still hurt, a lot.

In the next eight or so weeks, I gained even more weight. The midwives told me I may lose all of that before I ended maternity leave, especially if I was nursing my child. I kept telling myself that, and kept saying the phrase, “Nine months in, nine months out.” I believed that by Emerson’s 9-month birthday I could be back to my pre-pregnancy weight and size.

Nine months came and went, and I was still over THAT NUMBER. A year went by, I was still above THAT NUMBER. I doubled that time – Emerson was18 months old and I was nowhere near my pre-pregnancy weight or size. And that’s when I started Weight Watchers.

Last night I went to Weight Watchers for the first time since December 9th. I removed 1.6 pounds. This is a nice amount to remove, but it also bought me comfortably below 189, another number that means a lot to me.  Enough that a little slip from decadent New Years Eve party food won't put me back up into the '90s.

I hovered between 160 and 190 for about a decade. I have finally gotten back into that zone that I am familiar with. I was 184 before I got pregnant. I was a size 12, but occasionally fit into a 10. I wasn’t thin, I was still considered obese by doctors, but I really felt at ease in this body. I believe I will be at 184 before my 36th birthday.

Last night at my Weight Watchers meeting, we discussed weight loss contracts for the New Year. What we plan on committing to in order to reach our goals. I want to be a size 10 before June, before going back to Bonnaroo, before bathing suit season. This means I need to amp up Weight Watchers. I need to move my body on a daily basis, even if it’s 30 minutes of dancing and moving in front of the TV while Emerson is playing. I need to track more regularly and really become knowledgeable with PointsPlus so I can more easily gauge good choices when out at restaurants and social events. I need to be committed.

2011 is tomorrow – a new year, a new chance to be kinder to my body, show it the love it deserves. Healthy foods, plenty of water, more sleep, more exercise. It’s never too late to care for yourself, to get back on track. What contract will you make with yourself for 2011?