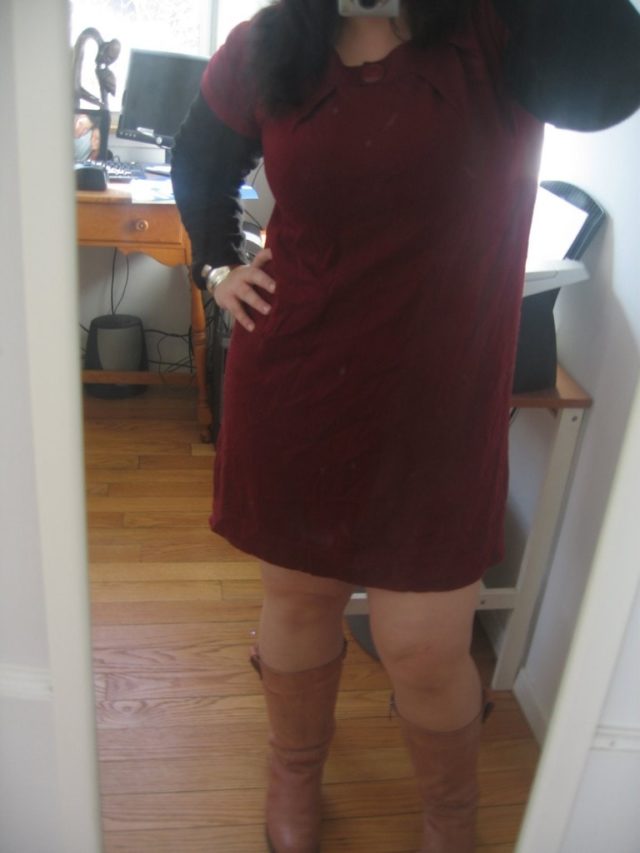 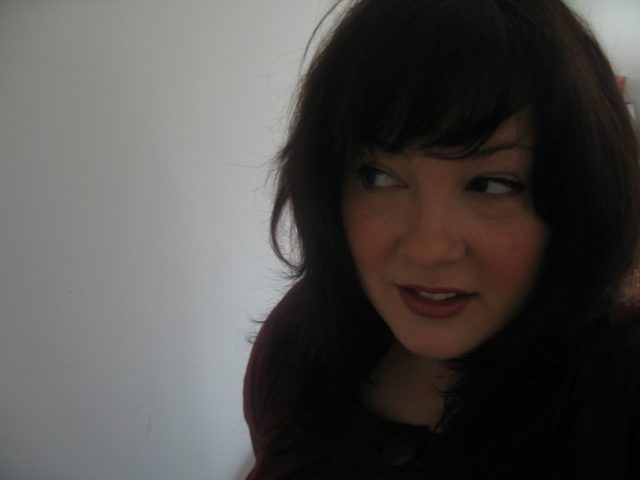 Today I didn't go to yoga – I really had a lot of errands to do and instead I gave the dog some TLC with a nice walk through the woods.

Hair was washed and conditioned, added pureology Root Lift and blew straight with paddle brush, using round brush on bangs. The Root Lift this time worked VERY well. Has been moved back to the medicine cabinet!

Makeup is philosophy The Supernatural in Beige, Cargo Matte BeachBlush in Tenerife, Imju Fiberwig, Maybelline UltraLiner in black on top lash line and on lips is Revlon ColorStay Lipcolor in Rich Raisin. 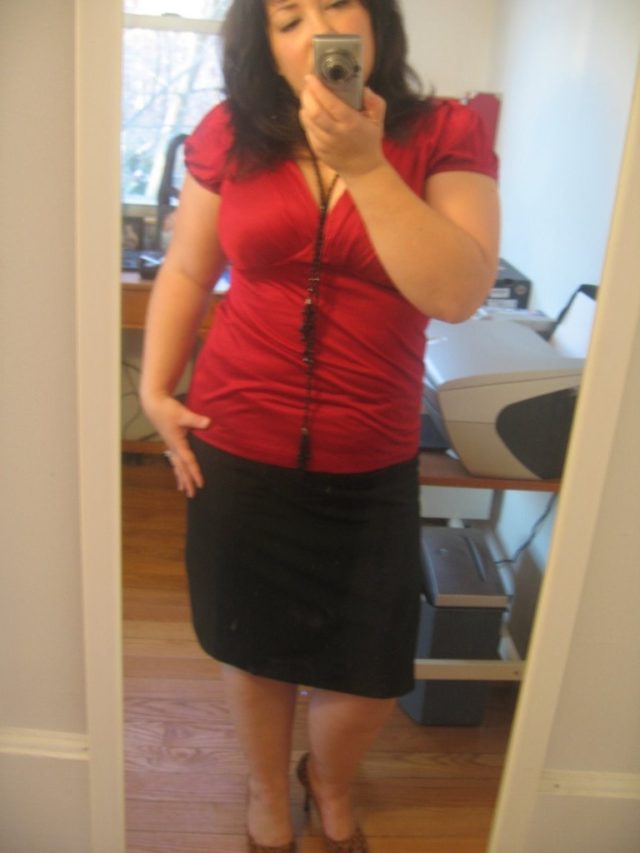 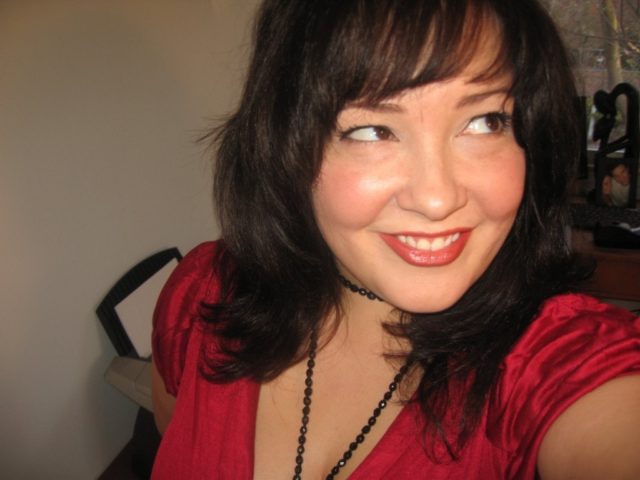 This evening I went to a holiday party at my sister's apartment.

To stay warm I wore my vintage coat that my Semi-Grandmother gave to me over a decade ago – she found it in an estate sale. 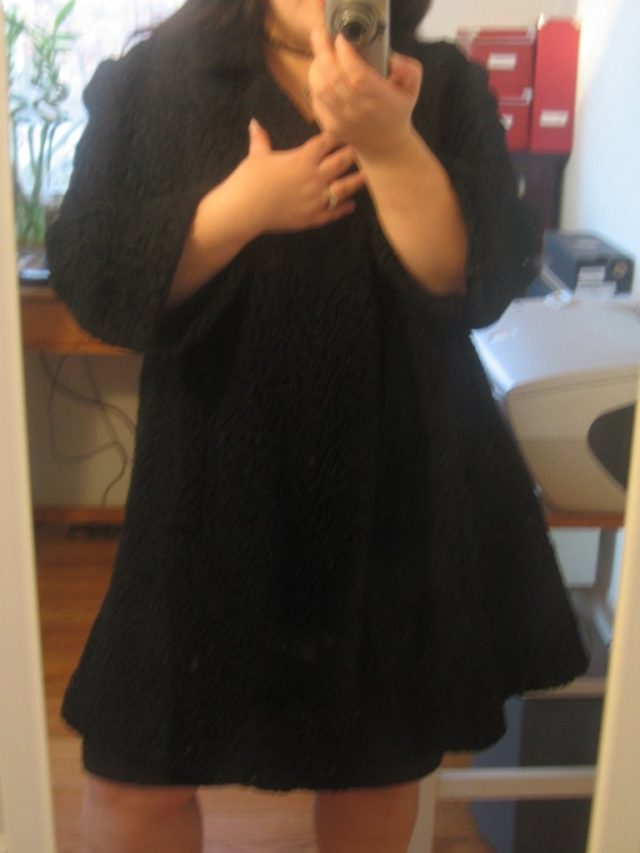 It is fur (when she gave it to me I asked what it was made out of and she said “the fetuses of baby lambs” and to this day I don't know if that was her quirky sense of humor or truth) but it was made in the 1940s and I would never usually wear fur except that this is old, I didn't contribute to these animals being killed for my fashion. In general I think wearing fur is awful. This though, it is more so a memory of my Semi-Grandmother (wife of my grandfather's cousin – my grandparents passed before I was born/right after and this couple sort of took over the grandparent duties until their passing a few years ago).

Hair was given a few minutes with hot rollers but took them out early for fear of getting “The Rachel” with them. Did sort of end up with that look (I used these same purple rollers back when I had “The Rachel” in the 90s), used Matrix Sleek water-free shine spray for finish.

Makeup is Smashbox Photo Finish primer, L'Oreal True Match concealer in W1-3, philosophy The Supernatural in Beige, Nars blush in Orgasm, Urban Decay shadow primer, Revlon ColorStay shadow quad in Neutral Khakis – the ivory over the lid, lashes curled and two coats of Cover Girl Lash Blast mascara in the very black shade. On lips is the Revlon ColorStay lipcolor in Real Raisin and then I used some pink shimmery (“true?”) powder from Bare Escentuals over my neck, chest and face for holiday shimmer.

The party was very fun – I drank a tad too much wine but had a great time catching up with friends, dancing to my sister's legendary music mixes (to combine 80s New Wave, Go-Go, Top 40 and Christmas standards in one party is tooo awesome). The party started a bit early as that it is an annual happy hour of sorts before heading out to the clubs. However we stayed until the end and headed home at the end of the night (rode in with my friend and her boyfriend). Came home, threw on my PJs and decided to watch a bit of TV, curled up with Ruckus and next thing I knew it was 5:30 AM! Went upstairs to have proper sleep in a proper bed after 2 Advil and two glasses of water!

Today I have done a whole lot of nothing. I finished my book, did the dishes and a load of laundry, took a shower, played with the dog in the yard, read my latest issue of Bust magazine and took a nap. My plan is now to head to the grocery store to plan out the week's meals and maybe clean the bathroom. Oh the glamorous life… 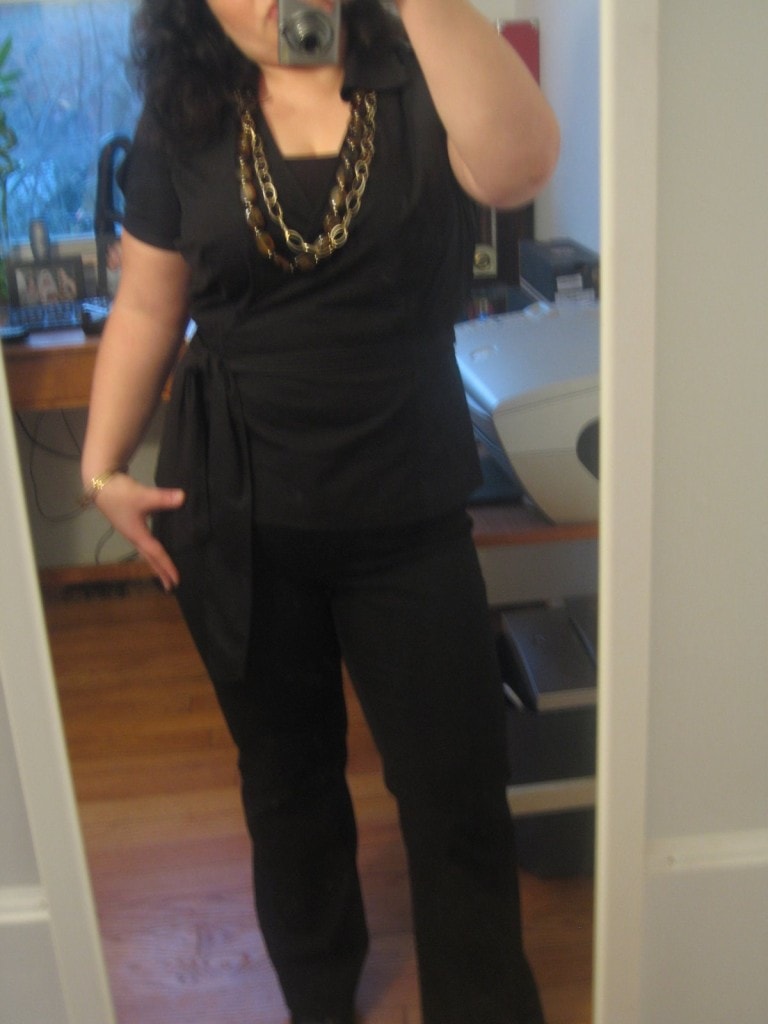