I heard Beth Ditto had a memoir out and immediately put it on reserve on Amazon. It arrived last week, and I let Karl read it first. He wasn’t able to go to the Gossip show at 9:30 a couple weeks ago and he LOVES him some Beth Ditto. I guess being married to a soft and curvy feminist who loves fashion has made him a man who loves big soft fashionistas feminists and Beth Ditto has become as much of a celebrity crush for him as Penelope Cruz (actually I think Beth has taken the top spot). Karl read it in two days. He read it in the bathroom, he read it while cooking dinner, he read it while I was trying to tell him about my day… I even caught him at 3am reading it in bed by the light of his Smartphone. He devoured the book and then handed it over. 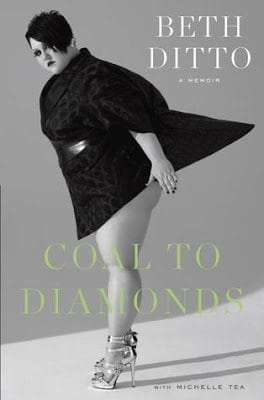 I too read it quickly – it’s a quick read and it’s also an interesting story. I liked it, I now understand Ditto and her band better and have more appreciation for their music and the band as a whole. But I was surprised that Karl was so obsessed. So after I too had finished the book we had our own mini book club and discussed it. And afterwards, I realized that more men need to read Coal to Diamonds. More men need to read blogs and memoirs about women and Bust magazine and Jezebel. Cuz men, even feminist men, have no CLUE that in this day and age there is still so much misogyny, so much abuse to women.

Karl couldn’t believe the years of abuse, rape, and awful situations that were in the Ditto family, and other families. We talked about how the majority of the women I know have been raped or sexually assaulted, and that it continues to take place in families, college campuses, backseats of family minivans all over this privileged country. This country where some people think feminism is passé, where women still make less than men and politicians want to control their uteruses. That women are fondled, cat-called, beaten, and raped by those they know and are supposed to trust on a daily basis at all socio-economic levels and that most families pretend it didn’t happen. He knew it happened, he knew women who experienced such things, but he didn't know the prevalence and how common-place or even accepted it is in some communities.

That there’s often a reason why women are considered crazy, emotional, psycho, clingy, defensive, overly sexual, repressed, and every other description placed on them and that reason isn’t anything they could control. That the government is NOT always there to help the female, and sometimes can make a situation even worse. That it’s not black and white, and women continue to get the short end of the stick, even in America.

And so I challenge you folks to share a book like Coal to Diamonds with the men in your life. Maybe he knows about your experiences, or watched a documentary with you once, but I don’t think men fully grasp the horrors many females experience. By reading such a book by a woman Karl already admired, I think it sunk in even deeper. And the more men who realize that this is still happening, the more likely those who do terrible things to women will be called out and the more likely the cycle of abuse can be stopped.