One feature of my job I adore is the community library. It’s in the 9th floor kitchen (which is conveniently located across from my office). Two bookcases chock full of the most random assortment of books. People donate books they no longer want, we employees grab one to peruse while our Lean Cuisine is heating up in the microwave, or borrow to make a Metro commute more pleasant. I am known for reading whatever is put in front of me – chick lit, an autobiography of a person I never heard of before, historical fiction, classics, whatever. This community library is perfect for me, because I just grab and go and treat it like Christmas Day – don’t know what’s in the package, usually pleased, sometimes wish I had the gift receipt.

I can’t really say I have a favorite genre of literature… but I can pretty much say that Sci Fi wouldn’t ever be it. While I love me some Doctor Who and Fringe, other than Margaret Atwood (who is brilliant and everyone should read The Handmaid’s Tale) I don’t like Science Fiction.

Now I can say other than Margaret Atwood…

…and the Hunger Games trilogy.

If it weren't for the office library, I would have NEVER picked up The Hunger Games. Not my scene. I rarely read the “must-read” books, and when I do I am usually disappointed (hello The Help). Everyone kept raving about these books, so I was even less interested. And then I was on Facebook and saw a picture my sorority sister Kelly posted from her trip to London – she was at an outdoor café, with a glass of white wine and The Hunger Games on her table. It looked so… blissful. And I dig Kelly… so I decided to dig into The Hunger Games (and then Catching Fire, and then Mockingjay).

I mention Margaret Atwood above, and I thought of her and her books quite often while reading Suzanne Collins’ trilogy. Katniss Everdeen is the protagonist, a 17-year old girl who lives in a future version of North America where each year, “The Capitol” chooses a boy and girl from twelve “districts” to fight to the death on live television (and yes, Katniss ends up being one of those who is part of these Hunger Games). The idea of Hunger Games isn’t so far-fetched when you consider the current direction of television trends. Such a topic reminded me of Atwood’s The Handmaid’s Tale in how it took a current social issue and envisioned how it might escalate in the future. Like Atwood’s books, I found Collins’ Hunger Games trilogy to be feminist in nature, though for a different reason. In Collins’ books, while the protagonist is a female, she isn’t defined by her gender, isn’t stereotyped by her gender, isn’t coddled because of her gender, doesn’t have to fight to prove herself despite her gender. Katniss Everdeen is just a kick-ass human. I read these books constantly thinking, “I would encourage my daughter to read this series.”

Yes, these books deal with a violent topic (and a topic that is so relevant with the current direction of television trends), but there is no gratuitous violence (these are considered Young Adult novels). I was impressed with Collins’ ability to so clearly describe settings and situations without being gory. That she could develop relationships without resorting to sex or mindgames. And again, there were no stereotypical male or female characters in this book; some people were strong, some people were sensitive, some people were vain, some people were flirtatious, but all were people first. 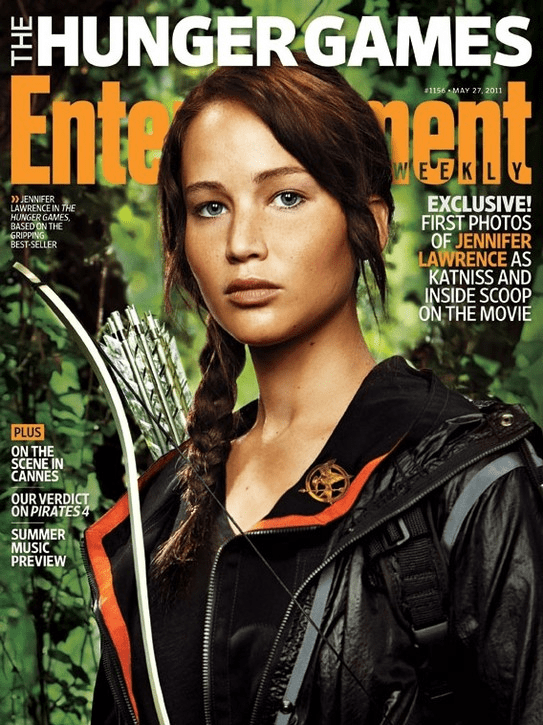 I don’t really want to go into further detail about these books – just Google “The Hunger Games” and you will find plenty of reviews, opinions, summaries (and even a trailer for the movie which is coming out in March of 2012). I just wanted to share this series with you, and encourage you, even if you’re not a Sci Fi fan like me to consider reading them. And if you have a teenager, consider letting her/him read them as well and show him/her that women can be strong and still emotional, sensitive and also successful, and first and foremost a human being. For the definition of a feminist is, “the radical notion that women are human beings.”

Kelly I haven’t yet had the chance to thank you for taking that picture in London – I don’t know if you even read my blog but you ROCK!