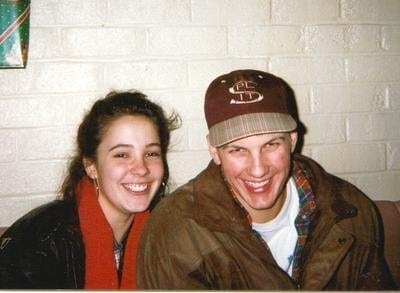 24 years ago today my friend Adam called me up and asked if I wanted to go to the movies with him and a bunch of friends. This guy Chris would be there, and he thought Chris and I would be a great couple.  I said yes, but I didn't have a ride.  He told me our mutual friend Shawn would pick me up, but he had to pick up someone else.

Shawn came to my mom's house in his Ford EXP, and then we headed to pick up his buddy Karl.  I'd heard about Karl.  I heard stories of how he could down a 40 in five minutes flat, and everyone said he was the most fun, the craziest, the best kind of friend.  I had never met him.  We got to his house, I slid in the back seat so he could have the front as he was far taller than I.  As we were leaving his neighborhood, I asked him why he lived in this town yet went to the high school of the neighboring town.  He turned around to answer me and I felt as though someone punched me in the chest.  I knew right then that love at first sight existed.

When we got to the movie theater, I was supposed to be chatting up Chris but instead was doing everything I could to get to know Karl.  though he was dressed similarly to the other guys, he still stood out in a crowd.  Little things he did, he said, made him unique.  During the movie, I scrambled to sit next to Karl and when I heard he and a few were heading to Denny's after the movie I made sure I was there as well.

This picture was taken at Denny's with the disposable camera that was in my Christmas stocking.  I shot the entire roll in the camera in hopes to capture this very shot – me and Karl alone.  I came home and told my mom I met the guy I wanted to marry.  I told my friend Adam that I liked Karl; they worked together at Safeway so he told Karl and gave him my number.  Our first date was another movie (there's not a lot to do in the suburbs when you're 17).  Almost a month later, January 26, I was on the phone with Karl late at night and told him how I was craving Beefaroni.  He got off the phone with me saying he had to get up early to go snowboarding with friends.  Ten minutes later, I heard pebbles hitting my bedroom window.  I looked out and in my front yard was Karl with a can of Beefaroni.  That night we kissed for the first time.

I like to say we've been together ever since, but we did take a break in 1997 for a few months.  We also spent many years in a long distance relationship while he was in the Navy and I in college.  But we always came back together, and we just get better and stronger with time.  We've survived cancer (him), broken bones (both of us), and many other injuries.  We've both lost parents, mentors, dear friends, two dogs, and other loved ones.  We've been fired, we've quit, we've started drastically new careers.  We survived long distances, opposite schedules, and an entire home remodel.  And together we made a human being who is the most awesome person the two of us know.