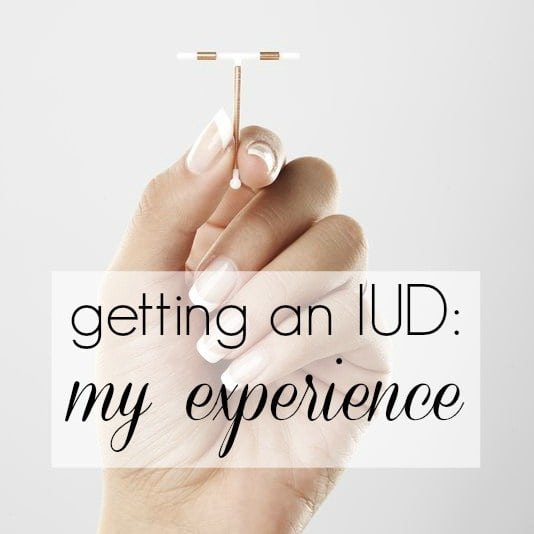 A year ago, I made the decision to get an IUD. After having our daughter, I tried hormonal birth control and had horrible reactions and decided to try a different route. I did my research and went with ParaGard, a hormone-free copper inter-uterine device which was free with my insurance.

In this post, I share my experience with having it inserted. It really wasn’t that bad, though I believe one should prepare for the worst and expect the best. Don’t go on an empty stomach. Take some pain reliever beforehand. Take the rest of the day off to rest, or if you feel great, to celebrate your decision.

In that same post, I shared the experience of my first period post-IUD. Heavier, but nothing radically different. What was different was the few periods after that.

Period 2: A true week of PMS. Cramps, breakouts, irritable, sensitive, breasts felt as though they were made of concrete, bloating to where loose jeans hardly fit, craving all sorts of random foods. After that, I had ten days of bleeding, full out super tampons weren’t enough and I was grateful for Dear Kates and black clothing sort of ten days. Then after that, I had a week of recovering, so incredibly exhausted and depleted my brain took a while to get working again. Three weeks of being pretty useless sucks, but hey, it’s a new thing in my body, next month has to be better.

Period 3: PMS exactly five days prior, it was so clear when I woke that it might as well have rang my doorbell. So clear, that when I came downstairs after getting dressed and grabbed a mug of coffee from Karl he looked at me and asked if I was feeling okay. As soon as he said it a light went off in his head. He knew, and he knew after that to tell me my hair looked pretty and get out of my way. I hated being a walking cliché of PMS but I felt completely out of control with my body, my brain, my emotions. As soon as I got my period, my mood improved drastically (though the cramps stuck around). I was also excited that it started relatively light. Maybe I’d be going back to how I was pre-IUD! Ha ha, notsomuch. Day 2 was so heavy I requested to work from home. Day 3 was a Saturday and I was feeling miserable. I was reading online and saw some people recommending orgasms for relieving cramps. Karl and Emerson were away so I decided to take care of things. When I accomplished my mission, I had the most severe shocking pain in my womb that I almost threw up. It felt as though the IUD had punctured through a part of me. I was literally seeing stars and crawled to the bathroom thinking I was going to vomit but by time I got there… it was over. I was scared. I kept pressing my lower abdomen but the pain was completely and totally gone. So gone it made me wonder if I was going crazy, but I could vividly recall the pain. The rest of my period was similar to the last – it was nine days long and all but the first and last days were extremely heavy.

Period 4: Five days of stereotypical Midol commercial PMS. The period started relatively light, and Day 2 was lighter than before, though still heavier than pre-IUD. It was Day 3-5, can’t recall but I was feeling really dreadful but to prevent such an experience as last time, I decided to deal with it with some ibuprofen, a heating pad and a nap. Even so, I was awoken by extreme blinding pain. I got up and called Karl and he could see how bad it was by the look on my face and that I was sweating. But then it subsided. But unlike the previous time, it didn’t go away. This pain was a bit like when you get a stitch in your side from running, but it was down in my lower abdomen. When I moved a certain way the pain was stronger. Again it made me feel as though the IUD had punctured me. The pain would come and go, I decided if I still had pain the next morning I’d go to the emergency room. The next day, I felt completely fine. I decided if I had such pain the next month, I’d go and get the IUD removed.

Period 5: Horrible PMS and nine days of medium to heavy flow. However, no sharp pain. I did get more achy of cramps around Day 3, but with some Extra Strength Tylenol was able to get through the workday. I still had a week after where I felt drained, but either I was getting used to it or it wasn’t as intense.

Period 6: Same, though I was down to seven days.

Period 7: Same PMS, though no cramps or aches during my seven-day period.

Period 8: PMS was only for a few days, and not as obvious. I could still wear my pants and jeans, though they were snug. My period lasted for six days, and while one or two days were heavy, the rest was manageable. Only a day or two after where I felt exhausted and braindead.

Around October I told Karl I couldn’t take it anymore. I was done with being useless three out of four weeks a month. It’s as though my body heard me and decided to even itself out.

After that last period, things became more… normal. I do have PMS, but it’s less than 5 days and not as glaringly obvious. I can handle a major presentation if need be, and I can get on my pants though they’re still snug. I adjust my blog editorial calendar to not have photo shoots for outfit posts during this time (Want to really feel bad about yourself? Put on too-tight clothing, slap a bunch of concealer over your dark circles and breakouts, and stand in the middle of your street while your husband tells you things like your necklace keeps lassoing your heavy painful breasts and your pants are giving you camel toe. Then go through the 100+ photos and try to find some where you don’t look insane or on the verge of tears).

The week of my period I am more diligent with staying hydrated, watching what I eat, exercising, and getting plenty of sleep. My period is heavier than it used to be, but it’s only 5-6 days long, and I have gone back to using a Diva Cup and haven’t needed backup. There’s little recovery time after my period; I’m a bit more tired but the brain is working properly.

Would I Recommend Getting an IUD?

Heck yes! Sure, there was some pretty rough moments (which from all research and discussions with contraception experts seems to be rare) but I’m glad I got through them. I feel I now own my body and my sexuality, no longer controlled by condoms, calendars, or hormones.

Can you (or your partner) feel it? If I put in a finger and press down, I can feel two little strings the consistency of finishing line. I have to actively be looking for them and adjusting to do so. Karl says he’s never felt them.

How should I prepare for an IUD insertion? Schedule it for the week right after your period ends. Wear comfy clothing, don’t go on an empty stomach. Take a pain reliever before and plan that you may feel gross the rest of the day. Rest.

How is sex after the IUD? Same as sex before. My body reacts the same, everything is the same. It hasn’t affected anything except that we no longer are restricted by condoms.

Can you use a Diva Cup with an IUD? Most literature says no, but sex educator Karyn Fulcher shared in the comments on my previous post that the concern is suction, not getting caught on the strings. If you break the suction before removing your Diva Cup, you should be fine. I started using a Diva Cup again by the 6th month and haven’t had any issues at all.

If you have any questions, do ask them below. I learned so much from all of you with the last post, and I know many of you gained much from the comments as well.  We deserve to have as much information as possible and the ability to own our bodies, our health, and our sexuality!