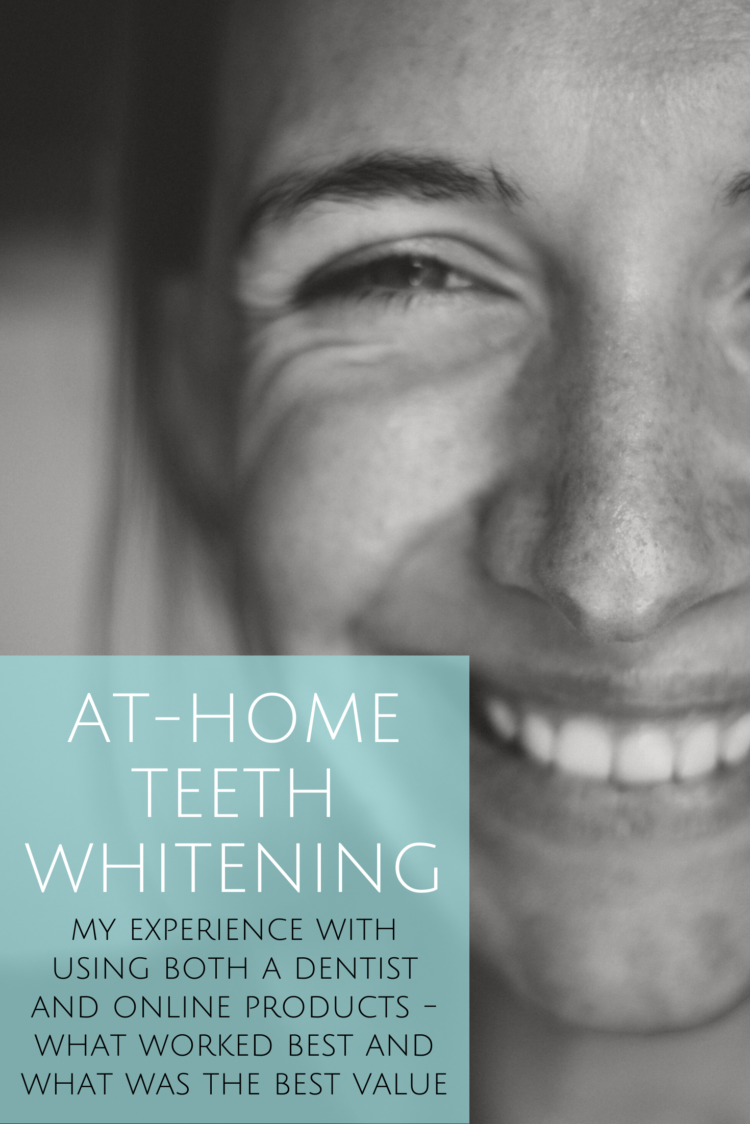 I noticed the older I got, the more yellow my teeth were getting. However, I feared teeth bleaching because I knew too many people who ended up with fake blinding white Chicklet teeth. I didn’t want Chicklet teeth. I bought whitening toothpaste. I bought Crest Whitestrips many times but always forgot to use them. Then at my next teeth cleaning I got in a conversation with my dentist about teeth whitening.  My dentist shared how she goes about successful and natural-looking at-home teeth whitening.

This post originally published in August of 2017. It has been updated with additional details from my experience and other products I also tried. 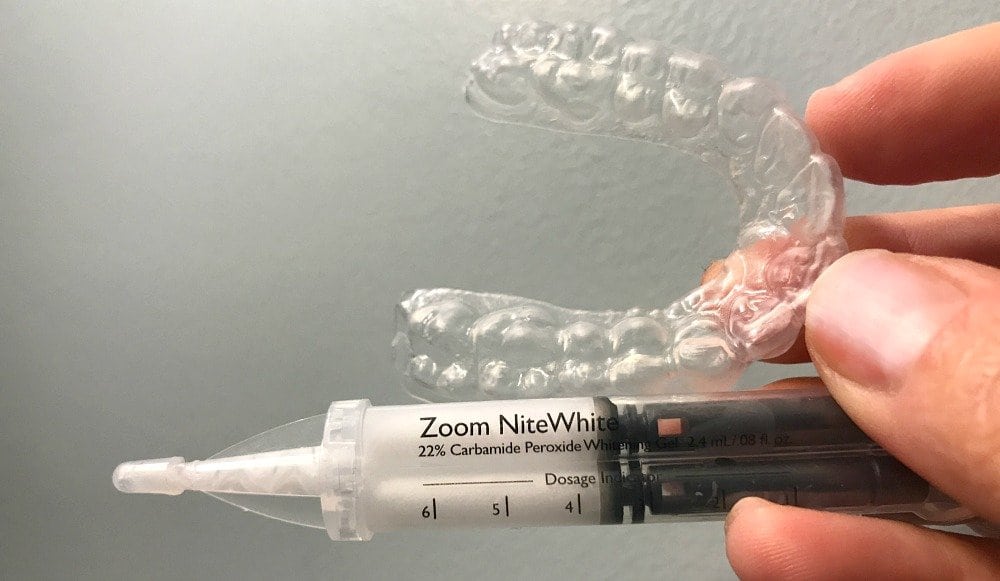 Phillips Zoom NiteWhite and custom trays made by my dentist: I've used since February and still have this much left in my first syringe of bleaching gel.

My Experience with At-Home Teeth Whitening

My dentist would make custom-fit trays that are thin, clear, flexible, and when on barely even show. She suggested Zoom NiteWhite by Phillips, in 22% Carbamide Peroxide, ACP Maximum Sensitivity Relief Formula.  The whitening agent is provided in syringes; you put a tiny dot on each tooth crevice in the trays. When you put on the trays, the dots smear to cover the whole front of the tooth. You then control how often and how long you leave on the trays to determine how white your teeth end up.

I have sensitive teeth. I use Sensodyne, do oil pulling, and still have reactions to ice and even sometimes feel nerve pain.  My dentist has done desensitizing treatments that help but don't get rid of all sensitivity. I feared my teeth would become even more sensitive with the bleach. My dentist informed me that because I control when the trays are used, I can start for just an hour, can take days off between use, and be sure to go slow so it doesn’t hurt.

I went back to the dentist a week later to have the trays made, which meant filling my mouth with Silly Putty and biting down. A couple of days later, I picked up my new trays and a zipper case full of syringes. 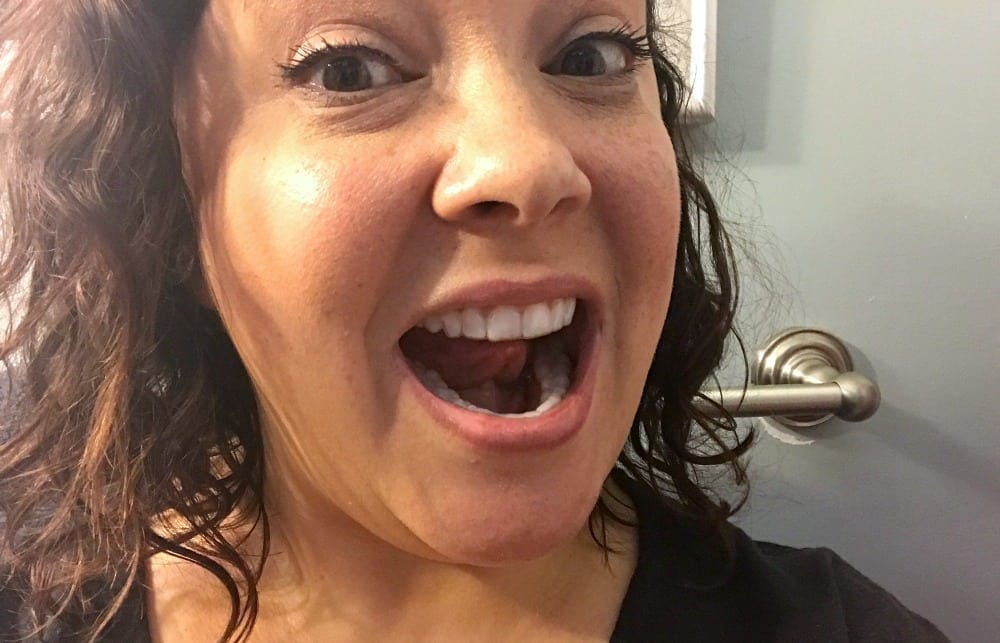 Wearing my custom-fit teeth bleaching trays – you can hardly see them!

The trays are like sleeves for your teeth; they look like Invisalign trays but are flexible, clear, and comfortable. I usually wear an NTI to bed to prevent grinding; since the trays completely cover my teeth I can get away without an NTI and still protect my teeth. You really want to put a tiny dot on each tooth spot in the trays; if you use more it can squeeze out of the top and irritate your gums.

I wore the trays overnight for two nights in a row. I found after two days in a row my teeth were sensitive and felt weird, almost as though they were all a bit loose. However, one night without and my teeth went back to normal. I then did it for one more night, waited a couple of days, and then one more night.  Four nights made my teeth a bit whiter than I desired but it seemed to balance out within a week.  I didn’t end up with increased sensitivity lasting after the bleaching process.

Every other month or so, I add more bleaching gel to the top tray and wear it for one night. It brings my coffee-loving teeth back to the color I desire.  My lower teeth are more sensitive and don’t seem to yellow as quickly so I don’t see the need to bleach them as often. I also usually just put bleach on the front 4-6 teeth, the back teeth aren’t as obvious and again why bleach teeth that don’t need it? 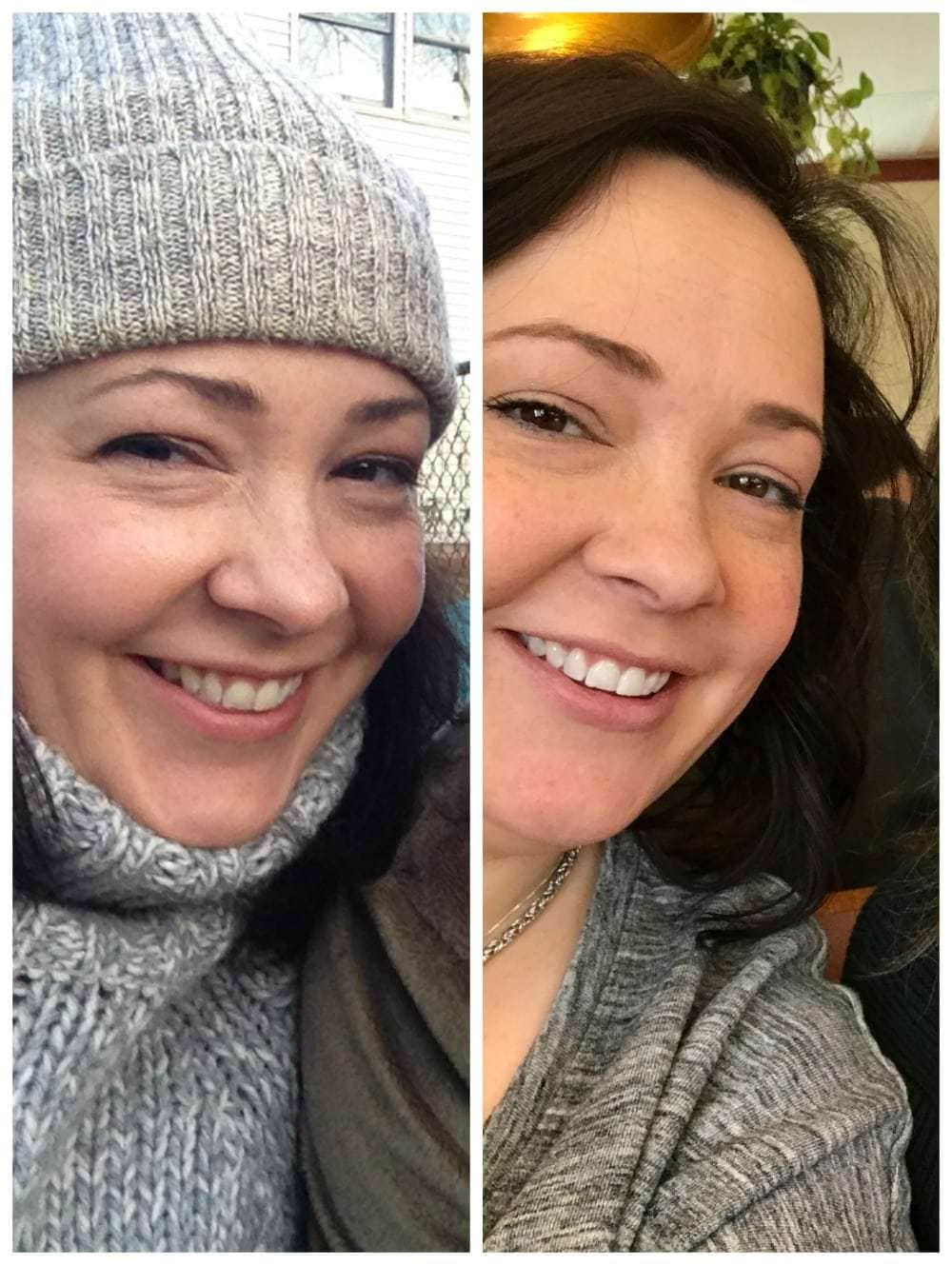 Before and After At-Home Teeth Whitening: Both pictures are selfies used with the same phone, no flash, no lipstick, and a similar level of makeup.

No one noticed I bleached my teeth. Not even my sister or best friend. However, I noticed. I felt my smile looked more youthful, my skin looked better, my lipstick didn’t look so obvious.

How Much Does Professional Teeth Whitening Cost?

The at-home teeth whitening kit cost me $300 and was not covered by insurance. After six months I had only used one syringe and a bit of a second syringe – a little goes a long way. My dentist recommended putting the syringes in the fridge to keep them fresh longer. The trays have held up even with my grinding and even one went through the washer and dryer in the pocket of my bathrobe and wasn’t damaged. I think to preserve your gums and to target the correct places it's worth it to get custom fit trays.

Tips for Successful At-Home Teeth Whitening Without a Dentist

I am updating this post with my experience over a year after receiving custom trays and Phillips whitening gel from my dentist.  My trays continued to work great, keep their shape, and I was able to use all my Phillips gel and have positive effects. I lost one of my custom-fit trays on vacation and wanted to find an alternative to spending $300 at the dentist.  I came across SportingSmiles on Amazon.  For around $60 I was able to order a kit that could have you create custom trays exactly like what I got from the dentist.  I decided to try it and if it didn't work as well, I'd then go back to the dentist.

SportingSmiles sent a comprehensive kit with clear instructions and everything I needed to make my own trays.  There are flat trays and then you mix to create a putty, put it in the tray, and then bite down on it.  The putty will solidify and capture the shape of your teeth without sticking to your teeth. The consistency of the putty was almost exact to what was used at the dentist. The kit provides packaging and a pre-paid mailing label to make it easy to send your molds back.  In less than two weeks I received in the mail a set of trays that look and feel exactly like the ones I got from my dentist.  Since I received a kit for upper and lower trays, I did both and was able to compare to the dentist-created one I still had.  I cannot tell the difference.

SportingSmiles also provided whitening gel in syringes larger than the ones from Phillips Zoom and with a wider opening.  It was harder to control applying the gel to the trays, I also found their gel to not be as effective while also causing more sensitivity than Phillips' product.  It works, but if you have sensitive teeth like me you may not like it. Good thing Amazon carries Phillips' whitening gel and it is exactly the same formula and packaging I got from my dentist for less than $50.

There’s nothing wrong with the color of your teeth, whatever color they are. However, if you have considered teeth whitening but are afraid of sensitivity or fake Chicklet teeth, know you’re not alone, and know there are options. Check with your dentist who knows your teeth and situation best to find the right solution for teeth whitening, and if you'd like to try at-home teeth whitening I highly recommend this kit!