I started hormonal birth control when I was 18. I lost my virginity and two weeks later I was getting my first pap smear and a prescription for a plastic disc of pills. Over the next decade plus I tried most every pill on the market, plus a few stints with NuvaRing. Some gave me yeast infections, some gave me acne, most made me utterly insane for half of the month. I hated them all, but they seemed to be a necessary evil as I wasn’t ready to be a parent.

December 2007 I removed my NuvaRing and said goodbye to birth control as Karl and I decided we were ready to start a family. Four months later I got pregnant and in January 2009, Emerson was born. Emerson’s delivery wasn’t an easy one; I was in labor for several days, forceps were used, and as the doctor stitched me up, she said if there was anything higher than a fourth degree tear, I had it. TMI, but the point is after all of that the last thing I wanted to do was consider an IUD and dealing with mild PPD, anxiety, and the emotions of new motherhood, I also wasn’t ready to add hormonal birth control back into my life.

So for the past six years, we’ve been a condom couple. We have our favorite condoms (Durex Extra Sensitive), our favorite lube (Liquid Silk for longevity, Nooky for the convenient bottle and how it doesn’t feel so grody you have to forego basking in the afterglow for a scrub-down) but honestly, after six years we were both ready to ditch the latex. 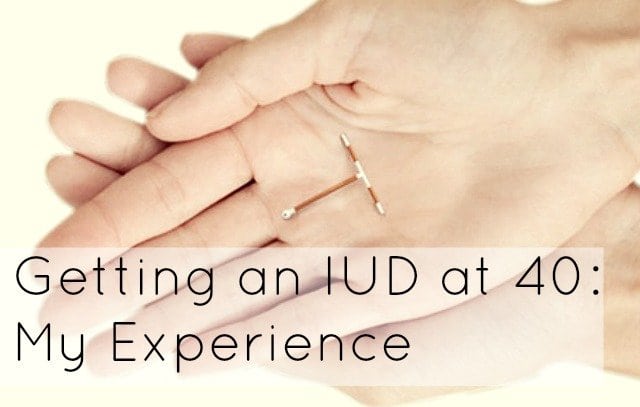 After researching my options (and trying Nuvaring again which after six weeks Karl said condoms were preferable to my hormonal mood swings), I decided on ParaGard, a hormone-free copper IUD. Please understand this is nothing like Dalcon Shield (reference), ParaGard has been used safely for decades. Able to stay in the body for ten years, it meant a decade where I didn’t have to worry about birth control. My insurance covers it 100% which also makes an IUD cheaper than birth control pills and condoms.

When I went to my gynecologist for my annual, I asked about getting an IUD. He said that since so many people order then don’t get an IUD, they had some in the office on hand so as soon as I got my period, they would be able to fit me in to have it inserted. My period was due later that week so I ended up having my IUD inserted exactly a week after my pap.

My doctor didn’t provide instruction or advice on how to prepare for the IUD but the Internet offers plenty. Make your appointment during your period for easier insertion. Take ibuprofen before you go. Bring your own panty liners. Wear comfy clothing. Expect pain and then anything from a day to a week of cramping, achiness, pain, blood, and other great things. I read all this, and then promptly forgot about all of it, showing up at the doctor on the very last day of my period in a pair of skinny jeans without anything in my bloodstream except a Grande Blonde from Starbucks.

The thing is, most “it happened to me” stories on the Internet are by younger women who haven’t had a baby. And for anyone who had a traumatic or invasive vaginal birth I do recommend waiting until you’re fully healed and comfortable mentally as well as physically. But for me, it really wasn’t too bad. It’s pretty much like getting your pap, but there’s a brief moment (we’re talking less than a minute) where is feels yucky and one second where there may be some pain strong enough for you to gasp, but nothing like where I read it felt like, “someone was throwing darts at my cervix.” After it was finished, the doctor had me lie down with my legs together and straight for a few minutes. After my rest, a nurse came in to check to see if I was dizzy or in too much pain, and since all I felt was a bit achy, she let me get dressed and go home.

I wasn’t in pain, just felt a bit achy, like minor cramps or ickiness feeling when you’re coming down with something. My skinny jeans weren’t uncomfortable, and there was no need for a panty liner. However by time I got to my car, I started feeling a little sick to my stomach. I don’t know if this was a comedown of nerves from the whole process, a tummy full of only java, or the procedure. I came home and took a couple ibuprofens, switched my jeans for jersey harem pants, and curled up in bed and passed out for a couple hours. When I woke I felt better, just slightly achy and a bit of gooey spotting.

Day 2, I woke and felt a bit off, mild cramps, still a tiny bit of spotting (not even enough to warrant a panty liner), and mid-day a bit of a headache but that could have just been work stress.  The spotting continued for the rest of the week, but the cramps subsided.  After five days we had sex, but were gentle and hesitant; after a week we were off to the races!

You should have a follow-up appointment with your gynecologist anywhere from two weeks to six weeks after insertion.  My doctor scheduled one for two weeks; it was a quick appointment where he just checked to ensure everything was where it should be.

My first period post-IUD insertion was different.  I'm usually a three day with a Diva Cup/nothing needed at night kind of gal.  This period lasted for seven days, with Day Three and Four heavier than I have ever experienced with strong cramps in the early evening (remedied with a single Aleve).  The rest of the time wasn't that drastically different from the past, though it was clear the period started with some leftover from the insertion.  I read to not use a Diva Cup with an IUD because it could catch on the threads and yank it out.  I don't see how that could be since the threads are curled up way inside, but I decided this go round to just switch to tampons and liners.

One thing to consider, I may not be the best judge of pain because I am the gal who walked around town for two weeks with a broken arm and went through labor for three days before asking for an epidural. But many women I know, especially those who have gone through childbirth, have a pretty high pain tolerance. The nurse in the office also said it’s usually far easier for those who have had at least one vaginal pregnancy, and cramps have never been a big issue for me.  So what is minor for me may be different for you.

You are putting a foreign object into your body, so there are obviously some risks. There is a chance the IUD may come out; it increases if you have had children. You may get stronger cramps and a heavier and longer period, there’s a greater risk for pelvic inflammation, and some women have experienced internal damage from the IUD. As with any medication or procedure, understand your risks, do your homework, and don’t be scared to ask your doctor any and every question. Your doctor is working for you, never be intimated by him or her. You pay your doctor's paycheck, you deserve to have all questions answered, all information provided, and you have the right to say no and find a new healthcare provider if you are not getting what you want and deserve. Own your health, own your body, and only do to or with it what feels right.

I’m 40 and in a monogamous relationship. I’m a grown-ass woman who has grown-ass sex with a grown-ass man committed to me. I think it’s about time for me to have great sex on my terms, on my schedule. Until there’s more options out there for male birth control, the IUD is a great choice for my point in life and I wanted to share in case there were any of you fellow grown-ass women out there looking for a birth control alternative.

Feedly subscribers, this post may seem familiar. I accidentally scheduled it for 4/2 instead of 5/2 so it popped up for a quick minute before I realized my mistake. Thank you all for your amazing emails on this already; I think it's important for women to share such stories, especially as we get older. There's plenty of twenty-somethings sharing their experiences; we women over 30 still have sex, still have questions about our bodies, and still want to know we are not alone in our experiences. I'm glad to help some of you with this post.