My life is far calmer with me doing my writing only at certain short periods of time during the week, but it’s like next thing I know a month has gone by and I haven’t written about a super cool experience or a trip, or new things I bought or whathaveyou! So anyway, I went to Rehoboth Beach, Delaware some weeks ago. This is the annual Girls Weekend – my mom, my sister, Emerson, and me. We arrive Friday afternoon and come home late Sunday and we have been doing it since before Emerson was in the picture and hope to do it for many many many more summers.

Since we found the Avenue Inn, we haven’t ever stayed at another place in Rehoboth. It’s just a block or so from the beach, it has a pool, hottub, a great breakfast, wine and cheese happy hour and warm cookies in the evening. Free rental of beach chairs and towels and a golf cart shuttle right to the boardwalk (and if you text them they’ll come pick you up at the end of your beach day). This past year, Avenue Inn did a major remodel of the lobby/main floor and it is GORGEOUS! So spacious and tasteful, there’s now a bigger dining area and an attached bar/lounge. Once Emerson came on the scene, we switched from a standard room to a suite, which doesn’t have a balcony but instead a pocket door to a little living room area with another TV and sofa bed. When Em was a baby, we’d put a Pack and Play in there, but now she lounges in the big sofa bed with all her stuffed animals.

Friday:
We actually have created a lot of traditions on our Girls Weekend, and not just where we stay. Fridays, we unpack and then since it’s late in the day we just head to the hotel pool. It’s indoor, but has a whole wall of sliding glass doors they open to a sundeck with the hottub, so it’s almost like being outside. When we tire of the pool, we all get dressed, take a walk down Rehoboth Avenue to the Boardwalk. We let Emerson race around the beach, scaring off seagulls and making sand angels and then head to Adriatico for dinner.

Adriatico has outdoor seating, an amazing waitstaff, kid-friendly menu and atmosphere without being crappy for us adults, and it’s not right on the main drag. While I usually try something new each time I visit a restaurant, at Adriatico we usually share a bottle of white wine (the type does vary) and their roasted garlic appetizer (roasted garlic, blue cheese, chopped tomatoes in balsamic and toasted bread to make your own bruschetta-type yumminess). Past couple of years my entrée has been the appetizer steamed mussels and their spinach, which is sautéed in olive oil with a ton of garlic. After dinner, one of us adults takes Emerson back to the hotel for bed, and the other two of us go out for the evening. Often I am the adult because I am exhausted from the workweek, but this year it was me and Debbie who were free.

This year we tried to find a new and different place to get a drink but each place had the wrong vibe. So we went back to our Rehoboth go-to – The Purple Parrot. We scored two stools at the bar but were soon ready to get out of there because it was being taken over by very mean, very drunk, and very obnoxious bachelorettes and their minions. We headed out back to their beach bar, which had a completely different vibe and crowd. It was quiet but not boring, and we soon befriended an adorable couple. Debbie and the younger gentleman got into a very heated discussion about British royalty and Greek mythology (two of Debbie’s favorite subjects so she was thrilled to find a kindred spirit) while his partner and I rolled our eyes and laughed at them. 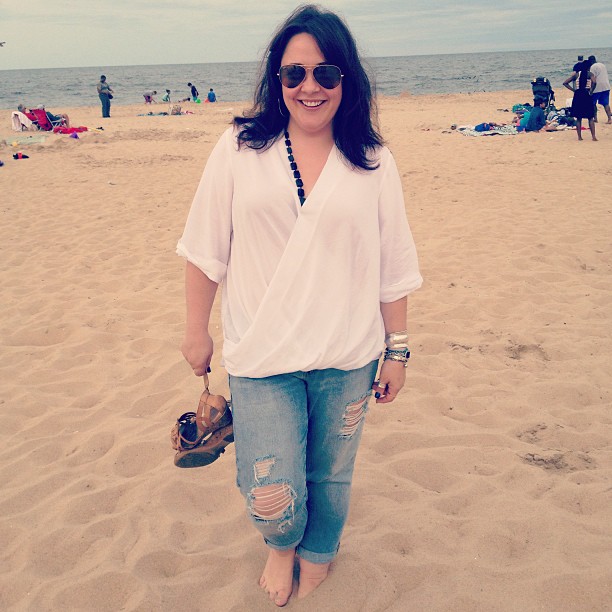 Saturday:
Surprise, surprise, a night where I have secure and reliable care for Emerson and I wake with a hangover. I was actually surprised since I only had one glass of wine at dinner and two cocktails. I think my tolerance is dwindling and I probably didn’t drink enough water. Headed to the dining room with the family for a couple cups of coffee, egg casserole, watermelon and more water.

After breakfast, we got ready for the beach and took the shuttle to the boardwalk. I cannot say how amazing the shuttle is, even though it’s such a short walk. Three chairs and Emerson’s folding cot, towels, toys, bags, and a four year old is a lot to navigate down skinny crowded sidewalks. It’s such a luxury, we didn’t even know they had this feature at the hotel until last year!

We got to the beach early, I think around 9:30 and the weather was phenomenal. Maybe 80 degrees, no humidity, very breezy/windy but not so much you had sand in your eyes. It felt like summers that my family and I would go to Saco, Maine. We got a great spot since there were few families there so early. Emerson was looking forward to going in the ocean, but once she got close she decided it was too scary and stuck to the dry part of the beach. Debbie and I did venture into the ocean, and even for us who love the sea we were amazed by how rough it was and though we’re both expert swimmers and wave riders we both ate it. Luckily I had my senses as I did a somersault in the ocean to grab my Ray-Bans which were on top of my head!

By noon I was feeling pretty dunzo. I had a headache that was traveling down my neck, I felt dehydrated, and Emerson decided she hated the beach and wanted to go back to the room and watch TV. We both had to use the bathroom so we went to the closest place – Grotto Pizza. Pizza for lunch it is!

Yes, Grotto Pizza is a Delmarva staple, and yes I do like me some Grotto Pizza, but I think one of the circles of hell is Grotto Pizza on the Boardwalk. This is where all the families go, where kids can sit in soaking wet bathing suits and fight over the last slice, babies can cry without dirty looks, and parents can ignore them and drink a beer. We walked to the backroom where not just the bathroom was, but the loudest, most stressed families and the worst acoustics. The bathroom had a line, they said one stall was out of order. I took my chances, saw it was just someone had a bad lunch and didn’t flush so I stuck one foot in the stall to flush the toilet. The line agreed I deserved the stall even though there were many in front of me for my heroic act, thank goodness because Emerson and I were both about to pop.

We went to our table in the loud, scary room and I was ready to have a panic attack. So loud, so dreadful, Emerson was still miserable, I had a massive headache and half the beach in my bathing suit. My mom and sister arrived, and so did our waitress who was a Godsend. Seriously, she totally felt our vibe, immediately got us water (with lemon!), knew what we needed, calmed me down. That and my mom, who is a rockstar. Emerson was getting mega fussy, and I was ready to say fine, let’s pack up, go back to the room and watch Sprout until you fall asleep. I didn’t want to leave the beach, but I just was over it all. My mom told me to go out to the boardwalk and relax and she would take care of it. I sat on one of those white benches and just watched the dunegrass sway in the breeze. I then decided to meditate – I closed my eyes and focused on my breathing and I could feel my body relaxing, my temperature dropping, my headache dulling. Then I felt a tap on my shoulder – it was Emerson. She apologized for being difficult and asked if I would go back to the beach with her.

Am I right or am I right? My mom is a rockstar.

So we went back to the beach, where we all had a good time. I dug a big hole and Emerson jumped in it, we made castles, we read magazines, we considered going back in the ocean and thought better of it, just letting the waves come up to our thighs. And around 4pm we decided to head back to the hotel.

We came back to the room and each took turns showering and getting ready. Then for the third year in a row we went to Claws for dinner. Gotta have seafood when you're at the beach! 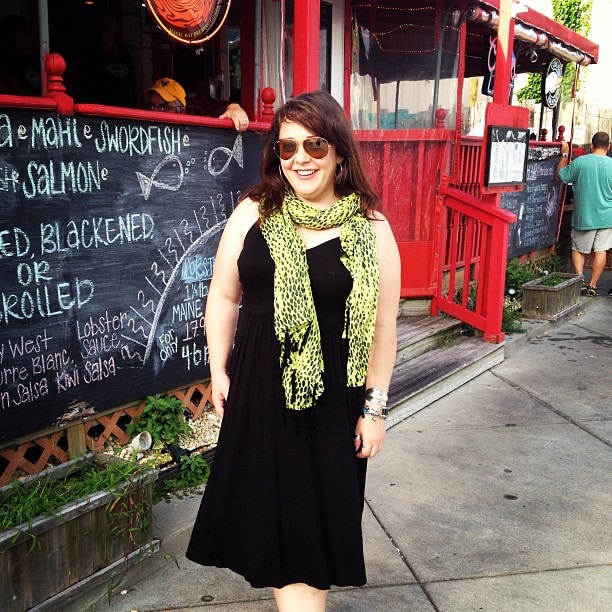 That night, my mom was worn out from being a rockstar and offered to put Emerson to bed again. Debbie and I were both pretty weary from the day and weren’t in the mood for a loud bar. We roamed around Rehoboth a bit, did some shopping (stay tuned for Missoni-esque striped orange satin palazzo pants. Yes you read that correctly), and then got ice cream and headed back to the room where we watched and snarked on House Hunters until we passed out.

Sunday:
I woke up at sunrise and couldn’t get back to sleep. I went down to the lobby to read a bit, but then grabbed a to-go coffee cup and walked to the beach. It was a bit chilly, but in that beach in fall wonderful kind of way. It was a gray day, supposed to rain later, and I found it beautiful. The beach was pretty deserted, I had a conversation with a woman who wakes each morning and walks the sand with her metal detector who says she finds enough good stuff to pay her rent. I got back to the room by 7am, Emerson’s usual waking time, though she was still passed out, worn out from the previous day at the beach.

We all went to breakfast, and then packed up the car to leave the hotel and head to the outlets!

The past couple of years we have barely hit the Rehoboth outlets because it is not a fun place for a baby or little child. We’d hit maybe two stores and get the heck out of Dodge. This year, Emerson is old enough that she thought the shopping was fun (and also realized shopping meant she may get things). We looked at a map of the three strips of outlets and planned our trip.

It was raining, we were tired, we got what we needed and got back on the road back to Maryland.

It was a nice weekend. To have four relatives in the same hotel and no one cried or screamed? Amazing. The weather was wonderful, Emerson made so many memories she can’t stop talking about Rehoboth. I’m glad that we have this tradition and it will continue!

Great items I packed for the trip: 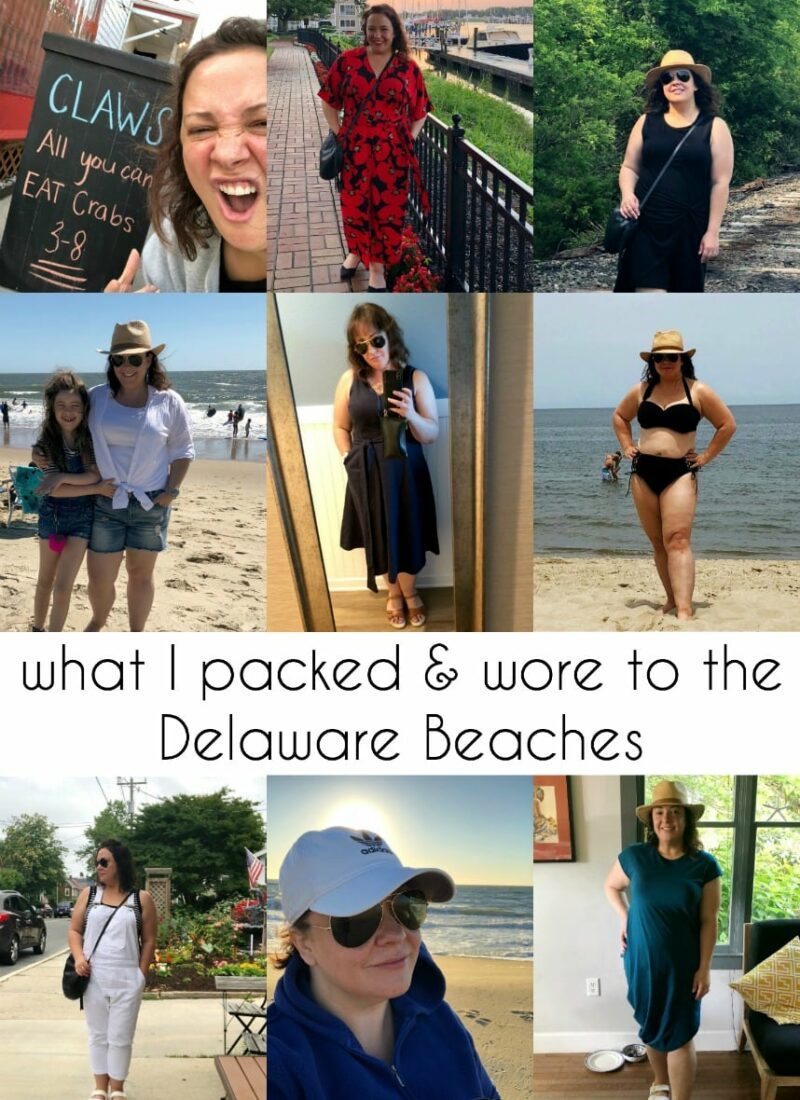 Delaware Beach Trips: What I Packed, What I Wore 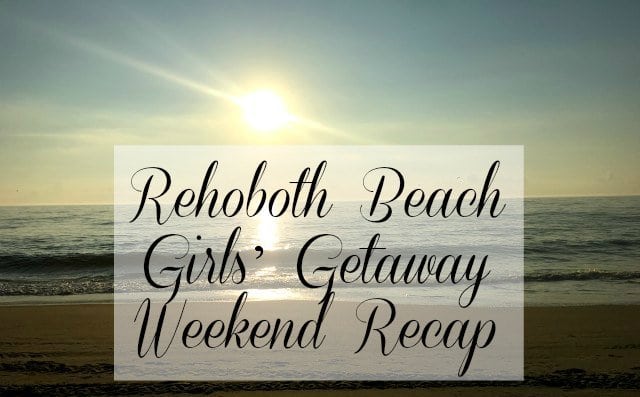 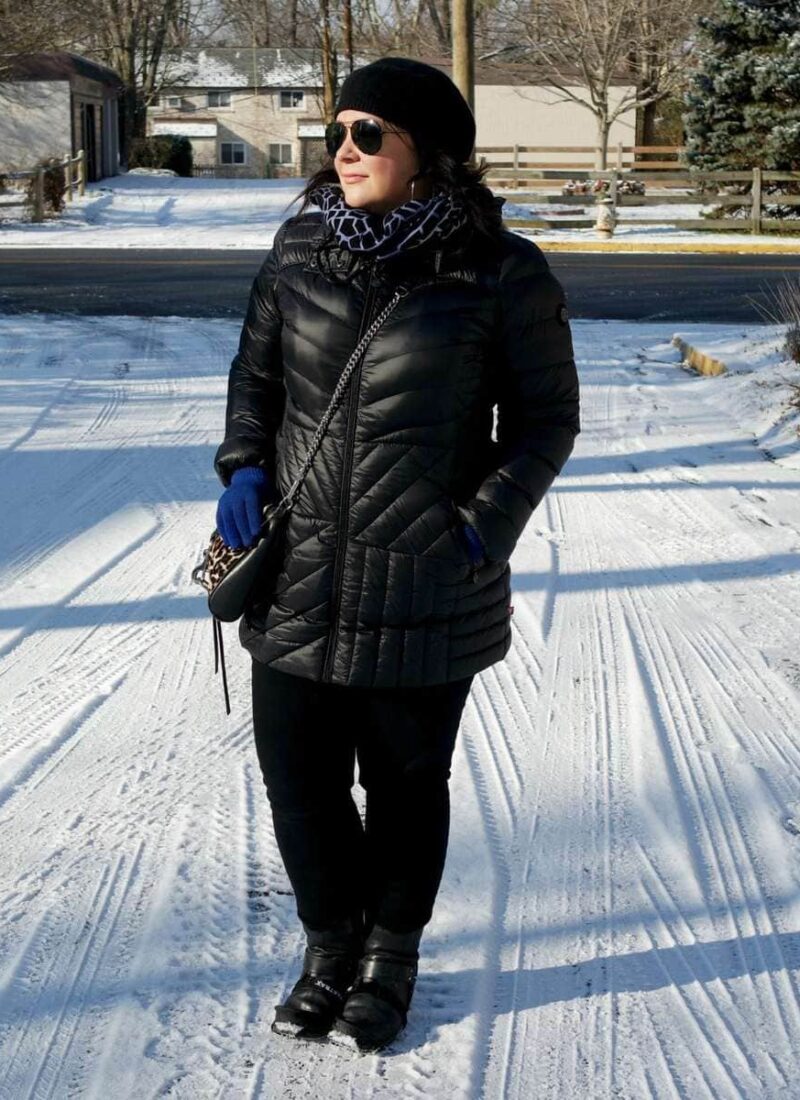 What I Wore: Real Cold 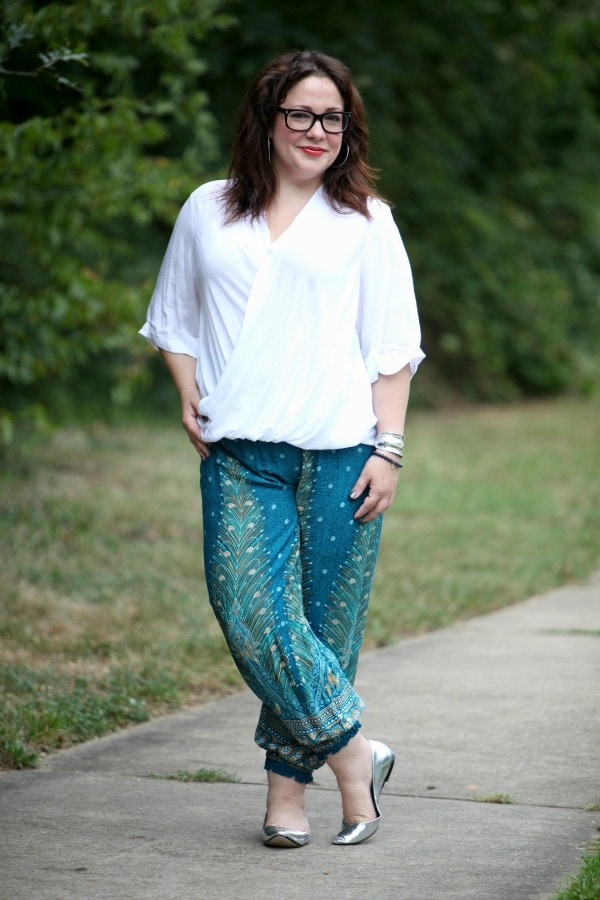 What I Wore: Casbah Casual