Last night I went to the Corcoran in Washington DC to see Andre Leon Talley give a lecture on his opinions of the Spring 2007 lines and to have a Q&A. For those who have never heard of this man before, Talley is the Editor at Large for Vogue. He has been there since 1983, previously working for Women’s Wear Daily and other fashion powerhouses in New York, and was part of Andy Warhol’s entourage.

Andre looked dapper in a black suit, dove gray shirt with white collar, gray silk tie and white pocket scarf. He wore burgundy socks and black flats with pave “Ben Franklin” buckles that were custom made for him by the designer who originally designed the shoes for Jackie Kennedy and her sister Lee Radziwill. He started the lecture with a slide presentation he created of his favorite collections from the Spring 2007 shows in New York, Paris and Milan. It was fascinating to see the clothing as we see it in Vogue, and then see the models backstage and how real the clothing seemed to be on relaxed women chatting and giggling. Suddenly sequined bikini bottoms with a silk blazer seemed wearable, and not just art on the runway. We also learned some inside stories behind the collections and designers. Vera Wang’s father passed away less than 24 hours before her show. Talley told the story of how she received the call from her father’s caretaker and dashed to his bedside in time to say goodbye, then raced back to New York to conduct her show. Miuccia Prada’s collection may have seemed to be full of unrealistically short dresses that no person on earth could carry off. In fact, a few days before her show the skirts for the collection arrived and she didn’t like them. Instead of sullying her collection with incorrect skirts, she just sent the models down the runway in only the tunic tops. Suddenly the strange collection of ultra-minis and skinny leggy models seemed to work – you focused on the gorgeous jewel tones of the silk tops and how they were cinched with an unexpected rough-hewn leather belt. Knowing the back story made the collection all the more beautiful.

It was also funny to hear Talley speak of Vera Wang as “Vera.” An elegant name for a simply elegant woman, but when her first name is used alone suddenly I imagine a blonde waitress chomping on gum and screaming, “Kiss my grits!” It really humanized Wang. Talley was discussing Wang’s fame, how she originally was an editor and was getting married and couldn’t find an appropriate gown. She designed her own and ended up getting into the business, now having lines of china, crystal, lingerie, and even clothing at Kohl’s. “What next Vera, Vera Wang coffins?” Talley laughed when speaking of a recent conversation with Wang and her new business ventures.

Talley has elegant and sophisticated tastes; the lines he found the best of a “super bad” season were classic standards like Balenciaga, Chanel, Ralph Lauren and Versace. Lots of white, platinum and silver metallic pieces, 1940’s inspiration and great textures. The theme for shoes was as he put it “ugly.” Large clunky sandals with huge platform heels and studs holding the leather to the wood soles. Dancer-inspired flats with lots of elastic straps. Very tall platform wedges with patent leather peep toes. “This Spring it’s all about the ugly shoe. Get yourself an ugly shoe,” Talley told the crowd to gales of laughter.

After the slide presentation, Talley took questions from the audience. I was expecting an audience full of well-dressed fashionistas but was surprised to see quite a variety of attendees. College kids in jeans, older women in artistic home-crafted designs, elegant socialites of the city in all ages, and many women who look as though they are interested in and learning about fashion, heading to the Corcoran after a long day at their government job. Women in couture, women in chain store pieces, women in vintage, women in Target. Talley noted some well-dressed women in the audience and asked them to stand. One was in a black and white heavy tweed shift with a foldover collar. She wore it over a lightweight white ¾ sleeve tee and carried it off with black flats. He loved the texture and the simplicity of the outfit. She admitted that she bought the dress at Antrhopologie. The second woman was in an off-white puff sleeved chiffon dress with a full skirt. The dress was covered with black oval polka-dots. She had a very large Fendi-inspired black patent belt around her waist, black tights and black heeled Mary Jane shoes. She admitted that the dress was vintage and the belt from Target. A cheer came up from the crowd when she mentioned Target and Talley smiled and said, “Oh I love Target, I love Tar-jay, I got there all the time!” Another cheer from the crowd.

Talley skirted away from the tougher questions, and didn’t really admit much about his personal opinions or thoughts. When asked about the movie The Devil Wears Prada, Talley said he never saw the movie nor read the book so he could not discuss it in any manner. He did admit that Anna Wintour, Editor-in-Chief of Vogue did attend opening night and found the film “entertaining.” Talley would not discuss the thinness of models in the industry today, stating that he feels that designers should be able to use any model they feel shows off their clothes best. He noted that Prada did use unusually thin and leggy models this season, but designers like Jean Paul Gaultier use models of varying heights, weights and bust sizes. When asked about the show Project Runway, he admitted that he has never seen an episode and that he watches little television other than the news. “The McLaughlin Group is the best show on television, I love the McLaughlin Group!” He also admitted loving Hardball with Chris Matthews.

The conversation changed to fashion, the current trends of American fashion and more specifically, the lack of care and respect in today’s fashion. This is something that bothers me as much as it did the woman in the fur vest in the front row who asked the question. She was most concerned with the fashion of Americans in places like airports. Talley believes that we live “in a spin-cycle world” and need to accept that. He told a story of him and Diane von Furstenburg visiting the Google headquarters and one of the first rooms he saw at the complex was a Laundromat. He found it brilliant that the employees were able to bring their clothing to work to clean and believes that is the way of America. Talley believes that a woman does not need to spend a fortune to look stylish, that one can update her wardrobe just by changing accessories. He said for Spring a woman should invest in some colorful flat shoes, a beaded necklace and a fabulous bag. He disagreed with an audience member who said that style is all about self-confidence. I agree with Talley, some people have oodles of confidence but terrible style. He was most impressed by simple, classic, basic outfits in the audience and during this conversation noted the outfit of a woman in her 40’s in the back row. She was wearing a basic black suit, but an elaborate necklace of varying lengths of jet beads. The accessory made the outfit.

After the Q&A session, the audience adjourned to the hallway where a reception was set up just for us. High-top tables wrapped in orange organza, waiters passing out feta and watermelon skewers, grilled shrimp and chicken . Bars were set up serving sparkling water, club soda, chardonnay and a signature-tini with a ginger/orange flavor and color. DC magazine passed out their latest issue. The crowd was 90% female, everyone checking out one another’s attire and chatting about the lecture. After about 20 minutes Talley came out to the reception, signing autographs and shaking hands. It was a wonderful evening, well put together, and I found Andre Leon Talley to be a funny, passionate and charming man. I am glad I was able to experience it. 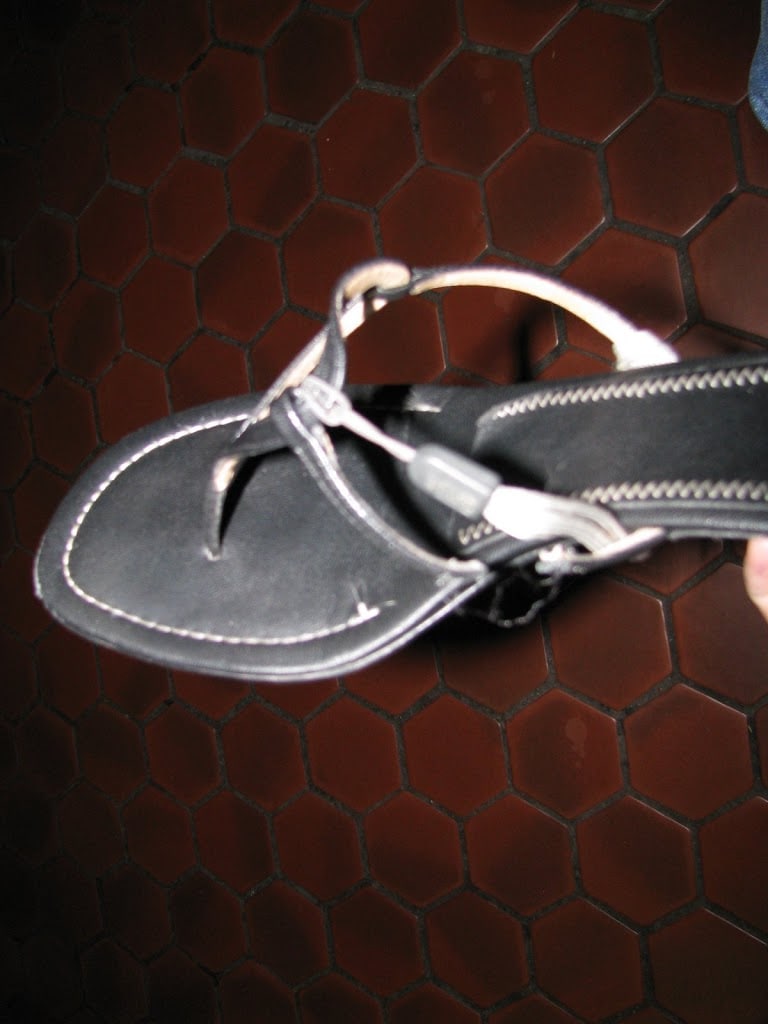 Living Large
No Baby Yet…

The Nordstrom Half Yearly Sale