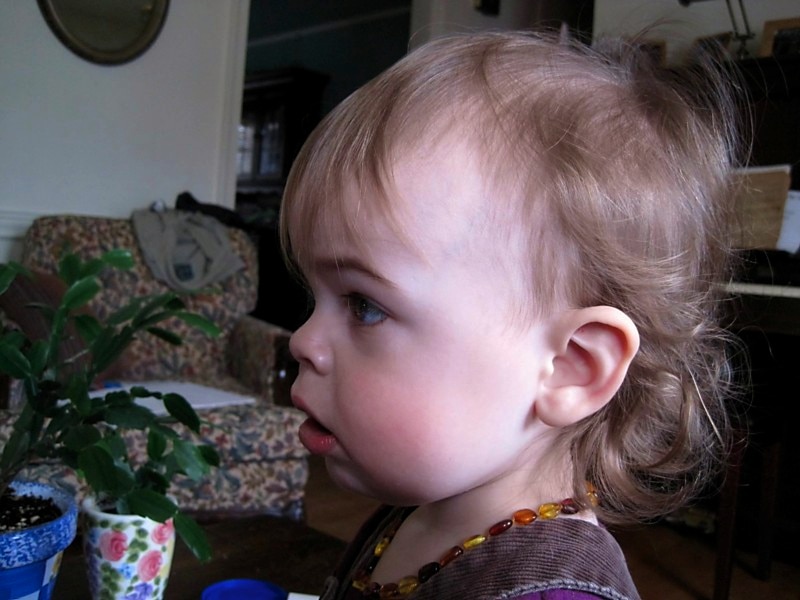 When I found out I was pregnant, I remember doing the ring trick with my husband, already positive that I was carrying a boy. I lay on the bed and he hung my wedding band above my belly, the ring slowly went from side to side, then started moving in a lopsided circle. We joked that maybe it was twins, since the ring couldn’t make up its mind. A week or so later, the sonogram confirmed that we were in fact having a daughter.

When I told people, they usually commented on the wardrobe of my future child. People would say she would be the best dressed girl in town, that she would be a mini fashionista. I remember someone saying I should start a second blog called “My Onesie Today” to journal her itty bitty sartorial choices.

The thing is, when I realized I was having a girl, I decided I would NOT make her into a mini fashionista. Don’t get me wrong, there is some darn-patootin’ cute baby clothes out there. The thing is, I didn’t want to raise a child who felt her self-worth and level of attractiveness was based upon what clothing she put on that day.

I was raised by a woman who loved fashion, but I was given the freedom to dress as I wished. I can remember loving a too-small Redskins sweatshirt, a hideous bright pink and ivory acrylic ribbed turtleneck, and in middle school started creating my own sense of style by wearing sweaters as skirts, my bedroom curtain as a cummerbund, drawing all over my jeans. I saw fashion as something fun, something creative. I want Emerson to make her own decision on fashion – whether she too will find it fun and creative, or if she will find it pointless and just something to cover the body. 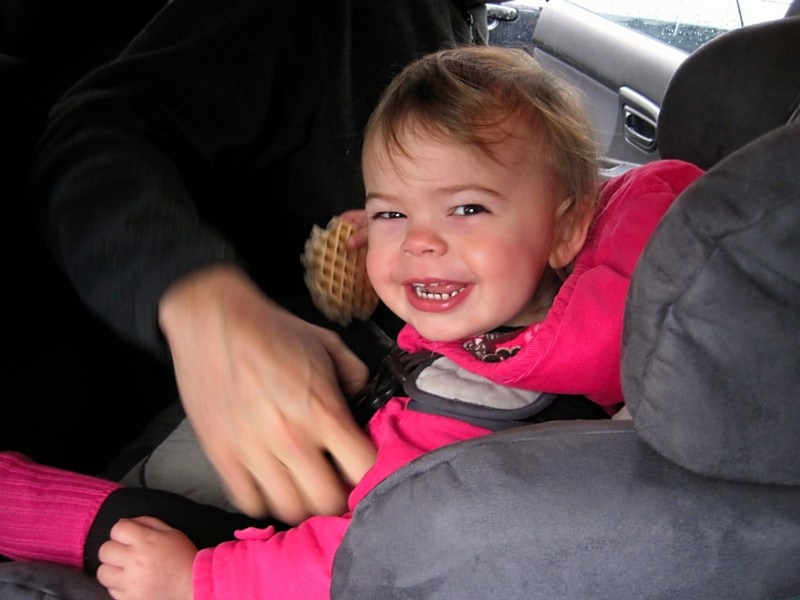 At two years of age, Emerson is a funny, smart, loving little person. Her hair is always in a fluff of curls and tangles on her head; she has yet to have a proper haircut, just a couple snips from my cuticle scissors to prevent a mullet. Her wardrobe is a combination of gifts from loved ones, 30% off sale merchandise from the Gap Give & Get promotion, and items I have collected from community clothing swaps, Freecycle, and consignment sales. She also wears clothes that I wore when I was her age – corduroy bell-bottom overalls, wool peacoats, hand-knit cardigans. 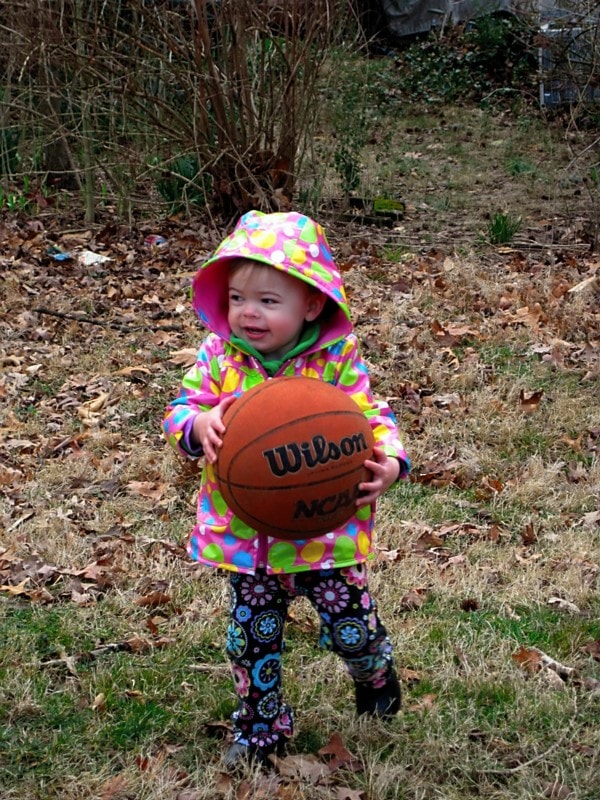 She has very few dresses because they just aren’t practical for a toddler who loves to climb, crawl under things, and run willy-nilly around a playground or the local lake. She wears lots of knits that can easily be laundered, lots of jeans that will protect her knees, and sturdy shoes that can survive being dragged on the ground while I push her on her tricycle.

I don’t purchase clothing for Emerson that has cartoon characters on it because I don’t want to use my child as free marketing for a company. With that, I don’t let Emerson wear clothes that say “Diva” or “Spoiled” or any other negative female stereotypical descriptions on them. I have to admit she does have a footed sleeper that says “Princess” but I got it off Freecycle practically new and she likes it because it’s green and has letters on it (she will point to them and say “R! S!”). 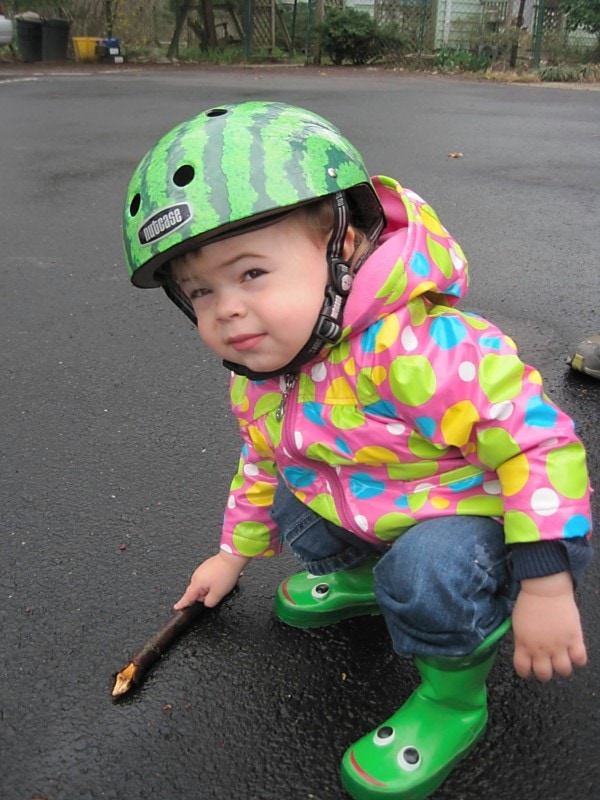 Emerson does know what she wears, and is at an age where she wants to make choices. We will hold up two tops and ask her which one she likes. I have learned that she likes the color purple, the color green, ruffles, and loves it when there is an animal on her shirt. I try to buy these if I can find them on sale because I want her to feel as though she has control over her appearance. In fact, the bike helmet she is wearing above she picked out herself.  I put out all the helmets in her size – ones with hearts, ones with skulls, ones with dinosaurs… she chose the one that was green, and looked like “an alligator.”

With this, Emerson doesn’t wear barrettes, headbands, or ponytails because she hates them. Saturday, we were playing in my room and I put a ponytail on the very top of her head so she could see it in the mirror. She found it very fun, but 30 minutes later as we were walking to the playground, she saw the ponytail in her shadow and pulled it out. After, she sighed as though it was a great relief to be free of it.

This weekend, Emerson and I were downstairs playing and she decided she wanted to go upstairs. She scrambled up the steps and right to our bedroom, where she climbed up on the ottoman at my dressing table. She picked up a brush and rubbed it against her face and said, “Pretty!” The feminist in me freaked out for a minute – I didn’t want her to think that she had to wear makeup to be pretty. What am I doing to my poor daughter’s brain by putting on makeup in front of her? Am I making her feel that cosmetics are necessary to be pretty?

But then I thought, I wouldn’t freak out of she did a finger painting and said it was pretty, or if she planted a plant in the garden and said it was pretty. Just as I find fashion as something that is fun and creative, this is how I find cosmetics. Makeup artists are called artists because what they do is a form of art – in place of oils and acrylics, they use powders and creams. So I sat down on the ottoman, put her in my lap and let her play with my brushes, look at herself in the mirror and play.

She took the brushes and rubbed them against her face, her arms and told me they were soft. She rubbed them against my face and neck and said, “Thank you!” (She has yet to realize that others are to say that when she does something nice, but I knew what she meant and that she was trying to be loving.) She brushed them in her hair and said, “Smooth!” She opened her mouth, played wither teeth, her mouth. She stuck a finger in her nose, used a different finger to stretch up her eyebrow. She examined her face, crusty nose, crumbs of bagel and cream cheese in the corners of her mouth, a smear of cream cheese still on her forehead, her hair practically in dreadlocks, poking out in all directions. She smiled at her reflection and said, “So pretty!” and I had to agree.