My bridesmaids bullied me into a manicure for my wedding day. I went to the salon just for an updo, but left with Essie Ballet Slippers on my nails. I felt for the manicurist because she was trying to make dry, rough, gnawed nails and cuticles look Wedding Day worthy.

That was the last manicure I had for almost a decade.

I was a chronic nail biter. Worse than that, I was a cuticle biter, the type that kept going until it bled and went in for more. In high school, I got pinworms and the doctor said it was likely from nailbiting. In college, I got an infection that left a permanent dent in my thumbnail. I even chewed on my wedding day to the point of bleeding, and it got on my wedding dress. When I was a trainer and visual merchandiser, my supervisor strongly suggested I get acrylic tips to have a more professional appearance during my presentations. I would wiggle my teeth between my nail and the acrylic and crack them off, sometimes even in my sleep. I gave up and just accepted that I was a nail biter.

Last summer, I was driving to work and was at a stop light and turned to look at the car next to me. In the driver’s seat was a really hot guy in a nice suit… and he was going to town on his nails. He was oblivious to his act, watching for the light to turn green, and looked as though he hadn’t eaten in days and his fingers were breakfast. It was disgusting to watch and I realized that while I looked at him with disgust I was doing the same exact thing.

No more justifying it, no more pretending, this HAD to stop. Not only did it look gross to watch and leave me with disgusting hands, it just wasn’t healthy. No more.

So I went home and researched the best ways to stop biting nails. I had tried the foul-tasting ointments and had chewed through it to the skin. I tried Band-Aids, using an emery board on rough parts so they wouldn’t taunt me, and I already shared my “success” with acrylic tips. But I learned about N-acetyl cysteine (NAC) which has been proven to help people who are chronic nail biters. After a chat with my doctor, I started taking 1,000mg two times a day; a month after starting NAC I got a manicure. 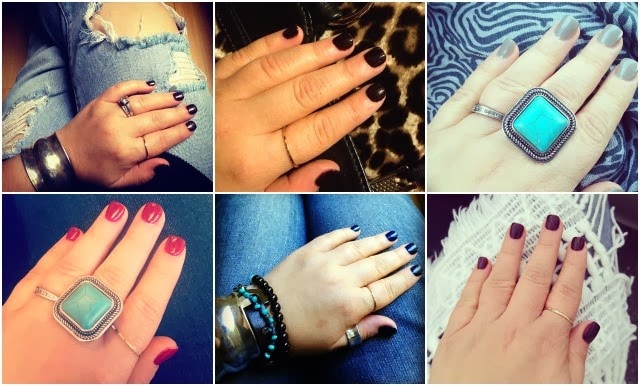 Oh man, I've become one of those people who shares her manicure on Instagram!

Since September, I have been getting almost bi-weekly manicures. I am back to acrylic because it makes the nails too thick to get to the cuticles, but I have them make them as short as possible. I started with neutral shades that didn't draw attention but gained confidence, donning a sparkly candy apple red for Christmas oxblood for fall, and currently a pale gray with a hint of shimmer.  Though gel polish is controversial, I have had more success with it because it is nearly impossible to chip and looks great for two weeks straight.  As soon as I get a chip, I start futzing with it.

Recently, I ran out of NAC and I went longer than two weeks between fills and I started chewing again. I completely pulled the polish off all but four fingers, chipped off edges of the nails, and gnawed my cuticles raw.  It taught me that this is something I will have to battle the rest of my life, and that this isn’t really a luxury but a necessity.

I keep a bottle of Solar Oil in my car and rub it into my cuticles when I get the urge to gnaw at a stop light, I have Sally Hansen VitaSurge Cuticle Gel and Weleda Skin Food on my desk at work, and Glysomed on my nightstand. The more hydrated my hands, the less I wish to chew.

Unlike a pedicure where you can play with your phone, sip a latte and read an old issue of Cosmo, getting acrylic fills and gel polish (can't chew it off, lasts until next appointment so no chips) means spending an hour with a stranger practically in your face and your hands in her control.  It has taught me to unplug, to develop all those thoughts in my head, and be silent for a while.  My current nail salon doesn't have a TV so I don't get lost in Wendy Williams or a cooking show, I just get lost in my mind.

I recommend checking out a site like Yelp for salon reviews.  I started off with the nail salon walking distance from my home, but I didn't think they did that careful of a job.  I went to Yelp and tried another salon, and they did a far better job, but the two women who I liked were usually booked and the technician I kept getting was sloppy.  I am now going to a salon near a college campus and they do a very careful job and have a clean, friendly shop.

Manicures are an extra expense, so I have had to make some changes to fit them into the budget.  I no longer buy Starbucks (unless it's my weekly date with Emerson, and then I get a cheap drink and no snack), I bring my lunch more often, I buy far fewer beauty products, and I box dye my hair between salon visits.  In fact, manicures have caused me to reassess a lot of my spending, and is a good example of how reducing small purchases helps me get what I really want or need.  And while I like the look of my new pretty non-mangled nails, I also know I have broken a lifelong bad habit.