I often get emails and comments about how I don't know how it is to be a stay at home parent, what it is like to be the parent of multiples. That my posts about fashion, style, and quality wardrobe pieces aren't realistic for a woman with that profession and lifestyle. And yes, you're right, I am not a parent of multiple children, and I do work outside the home.

For those who don't feel as though I understand their situation, I encourage you to read this wonderful post by Meagan Francis at The Happiest Mom:  Shopping, Showers & Self-sacrifice: The Lesson of the Blue Dress.  An excerpt from her post:

…I got home and learned of a Facebook status update that’s been making its way around the mom world:

“I traded eyeliner for dark circles, salon hair cuts for ponytails, designer jeans for sweat pants, long hot baths for lucky if i get a shower, late nights for early morning cartoons, designer purses for diaper bags and I wouldn’t change a thing!! ♥ ♥ ♥ ♥ Repost this if you don’t care what you gave up and will continue to give up for your children!”

Fellow moms, I have a problem with this kind of self-congratulation disguised as self-deprecation.
It’s not that I have anything against pony tails or diaper bags. I love pony tails. They’re cute and practical. Ditto diaper bags. I’m also not negating that motherhood is time-consuming and shifts a woman’s priorities (not to mention her budget) in a major way.
It’s just the idea that a pony tail is a sacrifice motherhood demands. That our kids are somehow better off if we live in sweats. The thing is, our kids did not ask us to give up our purses or our daily showers. Going without a bubble bath doesn’t make us better mothers.
Maybe designer jeans never were your thing anyway (they never were mine) or you couldn’t care less about giving up eyeliner. Then it’s no big deal. If you’re comfy in your sweats, fantastic! But unwashed hair or sloppy clothes isn’t a sign of virtuousness. Sacrificing the things that make us feel feminine or happy or heck, just human simply because we are mothers isn’t helping anyone in the long run.
I think that moms have a hard time investing in ourselves. Whether it’s spending more money on the clothes that we feel great in, or taking the time to do our hair, anything that could be considered shallow or frivolous or even overly feminine is supposed to fly out the window once we take on the Grave, Deep, and Meaningful job that is motherhood. We’re not really women anymore, we’re like asexual, frizzy-haired superheroes who live to sacrifice everything–even small things like showers, for crying out loud–for our children. 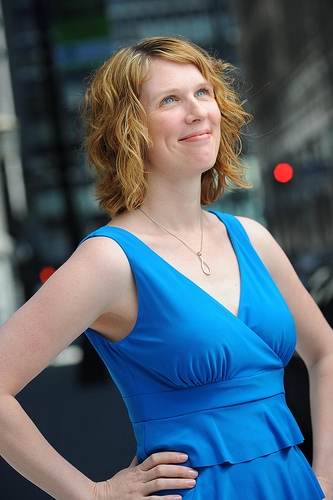 Image courtesy of The Happiest Mom

…There’s nothing wrong with being a mom who likes designer jeans. Or who takes time for her daily bubble baths. Or who applies eyeliner. Or refuses to carry a diaper bag (ever noticed that diapers fit just fine in purses?) Or who, like me, decides to splurge on something as selfish as a dress she feels fantastic in.

We’re worth it. I promise. And you know, I think our kids would agree.

Meagan Francis is the parent of five children, and a writer who has had her work in publications such as Parenting, Parents, American Baby, and Pregnancy.  She is the author of four books, including The Happiest Mom: Ten Secrets To Enjoying Motherhood, which will be published in April of 2011.