Redfin reached out to me as a DC style expert to ask best advice for keeping a small apartment bedroom and closet organized. As someone who has lived in small apartments with small closets (and a small historic home with even smaller closets) I was happy to share my thoughts. Here's the article: How to Organize a One-Bedroom Apartment: Keep the Clutter Out of Your Sleep Space. Others were also interviewed but one of my suggestions was included!

Shein is treating workers even worse than you thought. (The Cut)

How an urban myth about litter boxes in schools became a GOP talking point. (NBC News)

My eight deranged days on the Gone Girl cruise. (Slate)

Increasingly, we are being warned that our long-held definition of feminine beauty is not merely amoral, it’s also unhealthy. (Washington Post – gift article)

A groundbreaking new study questions everything we thought we knew about aging and metabolism. (Vogue)

Certain compounds in our skin determine how much we attract mosquitoes, new research suggests—and those compounds don’t change much over time. (Scientific American)

I'm a 62-year-old woman who only dates men in their 20s, loves being single, and can't wait to die alone. (Insider)

Caitlin Covington became a meme in 2019 for her love of fall. Three years later, she’s leaning into it harder than ever. (New York Times – gift article)

Why Reformation sells old Gap miniskirts for $128. (Back Row)

“I haven’t met a politician ready to do what it takes”: Greta Thunberg and Björk in conversation. (The New Statesman)

I am a former cannibalism scholar, and I finally watched ‘Dahmer.' (The Washington Post – gift article)

Half the world has a clitoris. Why don't doctors study it? (New York Times – gift article)

A female Iranian athlete who did not wear a hijab at an international competition will be directly transferred to prison once she returns home. (IranWire)

My husband was intrigued by Brazillian Jiu Jitsu and found a school not far from our home. Upon trying it out, he realized this isn't your typical martial arts. While you may hear the name and think MMA and violence, Brazillian Jiu Jitsu (BJJ) isn't about causing violence but about diffusing violence. No punches, no kicks, no eye gouges, BJJ teaches you how to deal with a “bad guy” who may be bigger and stronger than you without necessarily causing injury. Now my daughter and I are also taking classes. It's a very positive, supportive environment (my daughter and I take a class specifically for women's self-defense and often join my husband for a regular “combatives” class that it multigender.

Anyway, getting into BJJ has affected our watching and reading. And my husband and I ended up watching Born a Champion, a movie written by and starring Sean Patrick Flannery (best known from The Boondock Saints). Available on Hulu, Born a Champion is best described as a Hallmark movie for dudes who are into Brazillian Jiu Jitsu.

Flannery, who in this film resembles a younger Mickey Rourke, plays a character named Mickey, a Marine Gulf War veteran who is a BJJ instructor so revered we meet him while he's on a flight to Dubai to teach what he knows to a sheik's kids. This is how early this film becomes the testosterone-fuled doppleganger to a Hallmark film.

Flannery's character is seated next to a woman who shares her husband is in First Class because they had an extra seat and he has a bad back. Coincidentally, the husband is sitting next to a beautiful blonde sharing how he missing being away from his wife. Mickey and the pretty blonde (Layla) bump into one another heading to one's another's seats to offer to swap to keep the couple together.

Layla and Mickey end up seated next to one another in Coach for the remainder of the flight. She falls asleep on his shoulder and he doesn't move for five hours, not wanting to wake her, his bulging muscles and perfectly worn and fitted t-shirt being the ultimate pillow for her fair tresses.

In Dubai, he gets to be a hero to Layla, who seems pretty naive for a paralegal but you know, this is a guy's fantasy so she has to be a bit helpless while appearing smart and strong and a good life partner. And good life partner she becomes, providing him with a healthy blonde son, a homecooked dinner every evening, complete adoration and acceptance of anything he does while maintaining a trim little figure even postpartum.

So Mickey gets his ass beat in a fight, but it wasn't a fair fight. And he deals with the reprucissions the rest of his life. He blows folks away with his BJJ skill, and how he can dominate the most powerful fighters without causing any injury. He changes people's perspectives and their hearts, making fast friends from enemies.

Dennis Quaid is in this movie, and there's a hella cheesy moment when Quaid's character confronts Mickey and there's this story that takes place back in the Gulf War that connects the two that is so ridiculously cliche Hallmark Movie for Dudes I laughed, even though it was supposed to be not funny and again showing how Mickey is the best dude of all dudes in the entire world.

This film was the equivalent of the powerful city lawyer who moves back to her hometown to open a bakery and falls for the gruff yet sensitive carpenter and finally experiences True Love. The only thing that kept me from noping out is that Sean Patrick Flannery is a BJJ expert and well-known individuals in the BJJ and MMA world are in this film, often playing themseleves. Flannery played the sensitive yet strong dude with a difficult childhood well and there weren't any stunt doubles grappling on his behalf. Just as those corny Christmas romance movies on Netflix will reel you in, so does Born a Champion. Have the popcorn and rosé ready.

I kept hearing about the movie, Honk for Jesus, Save Your Soul. as being hysterically funny, a witty satirical comedy, and a must-watch so we decided to watch it last weekend. It is on Peacock, and free of commercial interruptions. Starring Regina Hall and Sterling K. Brown as the Pastor and First Lady of a megachurch in Atlanta, this movie is set up like their life is being filmed for a documentary.

I was expecting something like The Righteous Gemstones meets Abbott Elementary but this movie is not a comedy. It is a heartbreaking story of a very strong woman who sticks to her beliefs, even when they're destroying her. And Regina Hall better win all the awards for her performance.

This movie starts slooooowwwww. The whole “The Office” concept of performing for the camera but the camera capturing more can drag in a 30-minute sitcom; it was painfully full of nothingness in an almost two-hour movie. I kept thinking I'd like this better as a limited series. But the last quarter of the film makes you understand why this had to be a film.

This movie is devastating, and I think especially so for women who have been or know those who have been in relationships where they have had to be stoic, always have their act together, laugh and explain away tension and embarrassment, but believe in the partnership, the family, the dream so much they'd rather, “kill him than leave him” (quote from Hall's character).

My husband noped out before the end. I wish the movie was at least 15 minutes shorter because I have a feeling a lot of the negative reviews are because of how slow it is. Honk for Jesus, Save Your Soul. is based on a short film of the same name which is available to watch on YouTube. (link)


Watching the short, you can see how it inspired a feature film with a famous cast. It's powerful and there are even more subtleties (check out the prison number of the guy picking up trash)… but more powerful as a short. I felt more by there being less. You weren't confused into thinking it was a comedy, you knew it was satire. You didn't need more time to feel the pain, the desperation, the humiliation, and the wry humor of it all. The only benefit of the full-length film is seeing Sterling K. Brown and Regina Hall because they are phenomenal.

Carly Rae Jespen with some fantastic hair and Rufus Wainwright with eyeliner get together for a disco ballad called “The Lonliest Time” and the video is trippy and campy and cute (with fun fashion). Who could ask for anything more? As Jespen said about her song, “If you like 5-part string sections, 4:30+ track lengths, and disco power ballads… you might want to check it out.” 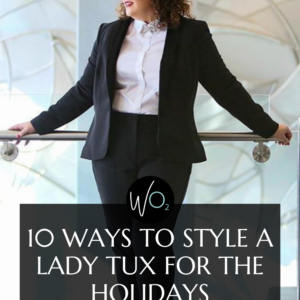 10 Ways to Style a Lady Tux